The Making of botIBI, the Coolest New Member of the IBI Family

The latest addition to the IBI family made its first guest appearance in CEO Scott Stewart’s AGM presentation on May 10, 2019, and has also been seen in some “sneak-peek” posts on IBI Group’s social media channels. This sparkling personality has a name – botIBI! Today we are releasing a new video that tells the story of how botIBI was created entirely in-house as a collaboration between IBI’s Corporate Marketing and Communications and Design Technology teams.

The latest addition to the IBI family made its first guest appearance in CEO Scott Stewart’s AGM presentation on May 10, 2019, and has also been seen in some “sneak-peek” posts on IBI Group’s social media channels. This sparkling personality has a name – botIBI! Today we are releasing a new video that tells the story of how botIBI was created entirely in-house as a collaboration between IBI’s Corporate Marketing and Communications and Design Technology teams.

Companies have long created personas to humanize their brands for stakeholders. An ageless brand ambassador, a persona embodies a distinct personality that seeks to establish an emotional connection with the audience, helping that audience to understand the brand message, while also differentiating it from the competition. An impactful persona is memorable. Take GEICO the Gecko for instance – have you ever met a cheekier creature?

With the announcement of the firm’s new strategic plan, A Smarter Urban Future in May of 2018, IBI Group is rapidly transforming into a technology-driven design firm. The Plan’s four parallel streams are designed to use existing and new technologies to grow IBI’s core business as well as future-proof the firm through new business models, products and services. Simultaneously, IBI’s brand is undergoing a revitalization that reflects this transition. Enter botIBI, IBI’s very own brand persona – an industry-first for the AEC sector.

The story of botIBI’s inception truly began with the announcement of the new strategic plan in 2018, when AGM attendees marvelled at the sight of a small hand-built robot rolling across the stage during the CEO keynote presentation – then representing the firm’s advances in robotic process automation (RPA). Later that fall, a workshop brought together participants from seven departments across the firm to kickstart the development of a vision for botIBI, and provide guidance on personality, character, visual representation and role.

Key takeaways included unanimous support for the creation of a “bot-like” persona to meaningfully connect stakeholders to the brand and new direction of the firm, and the desire for this persona to adapt to a variety of uses, such as storytelling mediums, campaign content, product launches, and print, digital, and virtual environments. Data was collected from the workshop and organized into a report, the contents of which informed a detailed creative design brief.

Led by Robyn Gillrie, Manager of Brand and Creative Strategy at IBI, a team of five designers was assembled to bring botIBI to life, each with a different area of expertise: Linden Laserna (graphic design and 2D characterization), Ryan Megaffin (multimedia design), Wilson Loh (materials and 3D printing), Melike Akin (3D visualization), and Matt DiLallo (virtual and augmented reality). Beginning with a live demo of botIBI’s first “manifestation”, a chatbot for IBI staff, the team used the design criteria in the creative brief to brainstorm what botIBI could potentially look like. 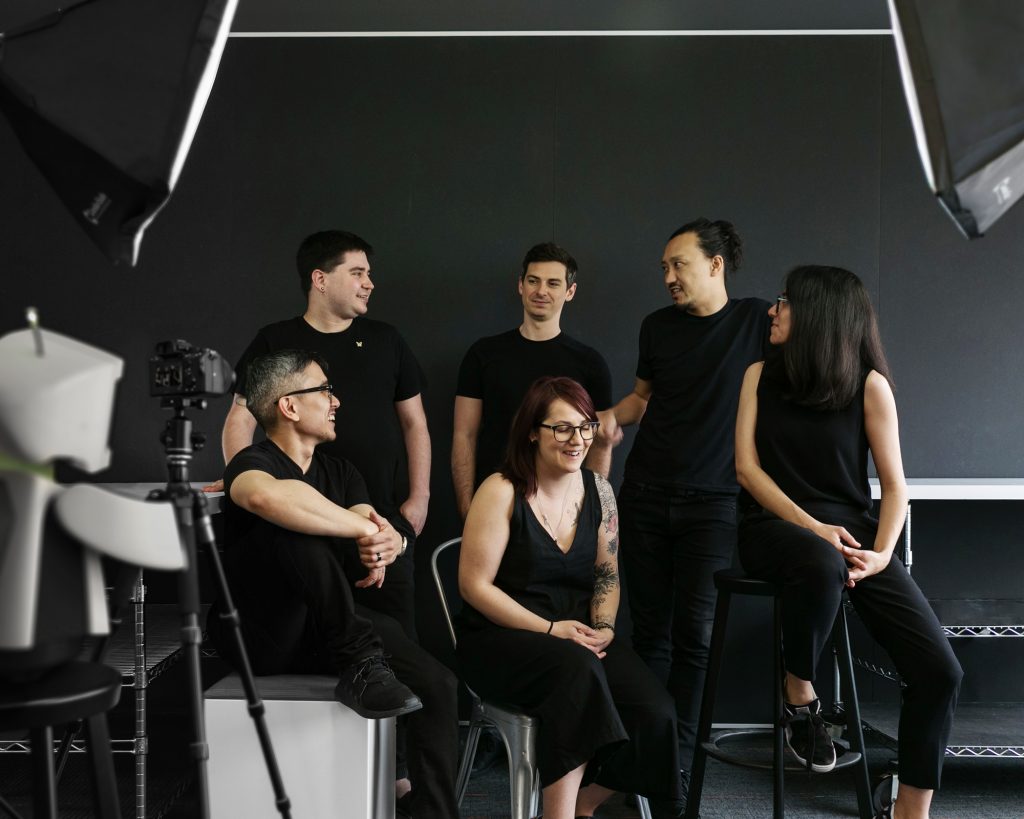 The design team then began to refine the design of the persona and bring it to life with character. IBI’s productivity chatbot in Microsoft Teams, then under development, was identified as prime testing ground for introducing visuals and inflections of the persona’s character through conversation to a small user group. botIBI then made its official debut to all staff in April as the virtual manifestation of the chatbot, next appearing in 3-dimensional form on May 10, 2019, at the firm’s AGM as the star of the chatbot demo video presented live to investors, the Board, and IBI senior leadership.

botIBI has since been developed as a 2D character that can wave, wink and clap in animations and as our chatbot; as a 3D-printed figurine that sits quietly on a desktop; as a rendered, life-like character that makes you want to touch it; as a sidekick in virtual reality; and will soon be making more frequent appearances in the firm’s brand and marketing messages. botIBI’s various manifestations are complex and endless, but their mandate is simple – humanize the brand, and embody the firm’s new strategic direction by becoming a trusted advisor and guide for staff, clients, investors, and other stakeholders for years to come.