Our zoning bylaws are broken. Ask yourself: does zoning create the type of cities we want? A growing body of evidence suggests that zoning has become the problem. Before we examine today’s problems with zoning, it is worth looking back at where we started. Modern zoning was created 100 years ago in New York City...

Our zoning bylaws are broken. Ask yourself: does zoning create the type of cities we want? A growing body of evidence suggests that zoning has become the problem. Before we examine today’s problems with zoning, it is worth looking back at where we started. Modern zoning was created 100 years ago in New York City on July 25, 1916. The regulation was created in reaction to the construction of the Equitable Building in Manhattan. The building’s massive scale and lack of setbacks blocked sunlight to the street and neighbouring buildings. The resulting bylaw divided the entire city into three basic zones: residential, commercial, and industrial.

These basic zones have only become more complex as they evolved. Today’s zoning bylaws ascribe land uses, height limits and separation spaces, amongst other things. As the bylaws became more prescribed, they multiplied in number. Instead of a single zone for residential, commercial, and industrial there can now be dozens of zones for each. This has resulted in many over-complicated and hard-to-read zoning documents that rarely result in the best use of a site.  In Manhattan researchers found that 40% of buildings could not be built today because of a zoning bylaw violation.

In many neighbourhoods, across North America the house on the left is permitted, but the houses on the right would be illegal

Looking back on its history, we begin to realize that zoning is inherently negative. From the beginning, zoning was conceived as a reaction to an undesired building. Instead of defining the future of our cities we enacted a list of things we did not want. The problem with this approach is that rigid definitions provide certainty at the expense of creativity and flexibility. New ideas, technologies and city-making opportunities are often automatically disqualified because they do not fit the existing framework.

The restrictiveness of this approach can be observed in different ways. The ability for zoning to restrict development is evident in many growing cities. The most extreme example is San Francisco, which is undergoing explosive growth that coincided with the rise of the tech industry. The demand for housing is increasing, but the supply of housing is not keeping pace. Zoning laws in the city and across the region have been identified as a major contributing cause for the housing shortage. A similar situation is playing out in Vancouver as well. By narrowly defining the form and density for housing, we have severely reduced our options to provide more housing.

The restrictiveness of zoning has also been exposed by new technology. Video rental stores are a perfect example. Many zoning bylaws identify video rental as a use and some have gone into further detail by defining them as video cassette outlets. As video technology evolved to DVD, the wording of many bylaws stayed static. To solve this issue, municipalities must update their bylaws or reinterpret the meaning to encompass new technology. In the end, video streaming services have rendered these bylaws obsolete.

There are also problems that arise when we apply zoning regulations to existing urban areas. Large areas are often zoned at once, without careful examination of the existing characteristics of the district. When the new zone is more restrictive, existing developments no longer conform to the zone and are grandfathered in as a legal non-conforming use. This allows the development to continue operating but any changes must conform to the new zone. This discourages owners from redeveloping their properties. When the new zone is too lenient, owners will take advantage of new permissions to maximize the size of their building, without increasing the number of units or otherwise adding density. The monster home phenomenon in Vancouver is an example of this effort to maximize building size. In this case new owners, have torn down smaller homes and replaced them with large houses. The result is a fragmented streetscape. Whether too restrictive or too permissive both situations result in unintended consequences.

In these examples, the limitations of zoning are made abundantly clear. No matter how many zones we create we can never account for the nearly infinite range of urban planning, design and development possibilities. The solution is to abandon this impossible task and instead focus on the positive. We must define our image for the future of our cities and allow for the endless possibilities to fill in the blanks. 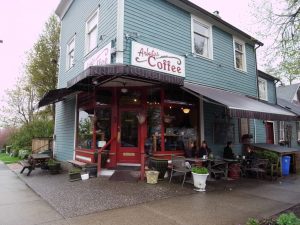 This coffee shop was grandfathered into its urban neighbourhood. Because of zoning restrictions, it would not be permitted today

Both of these systems recognize that zoning is not a means unto itself but rather a tool that should be used to create thriving cities.  As planners, we must not lose sight of this objective and get bogged down in the process of city building. Take this anniversary as an opportunity to reflect on how we regulate city-building and imagine new solutions.