At Home with Frank Lloyd Wright

Frank Lloyd Wright designed his home and studio in 1889 when he was just 21 years old. The result was a fertile reflection of Wright's developing aesthetic which neatly portrays the early stages of his famed career.

Frank Lloyd Wright designed his home and studio in 1889 when he was just 21 years old. Wright moved to Chicago in 1887 and worked as an apprentice for the well-known firm, Adler and Sullivan where he quickly made an impression on his boss and mentor Louis Sullivan. Sullivan agreed to lend Wright $5000 to design a home for himself and his wife Catherine in the Oak Park neighborhood of Chicago. This was the first time that Wright was given full creative control which resulted in a fertile reflection of Wright’s developing aesthetic. Wright renovated the home several times over the 20 years they lived there, to accommodate his blossoming family and career. The home is now managed by the Frank Lloyd Wright Trust, and has been restored to it’s 1909 condition, the year that the Wright family moved out.

Wright’s open-concept rooms allowed visitors to flow easily from one room to the next. This feature was a novelty at the time but was quickly adopted in 20th century home design for its promotion of socialization and flexibility. Against the grain of most family homes, his did not include an attic or much closet space as he felt that things that were stored away would be forgotten. He believed that homes should display family pride and values, and Wright displayed every element of his home as a work of art, from his self-designed furniture to his Japanese prints he collected abroad. 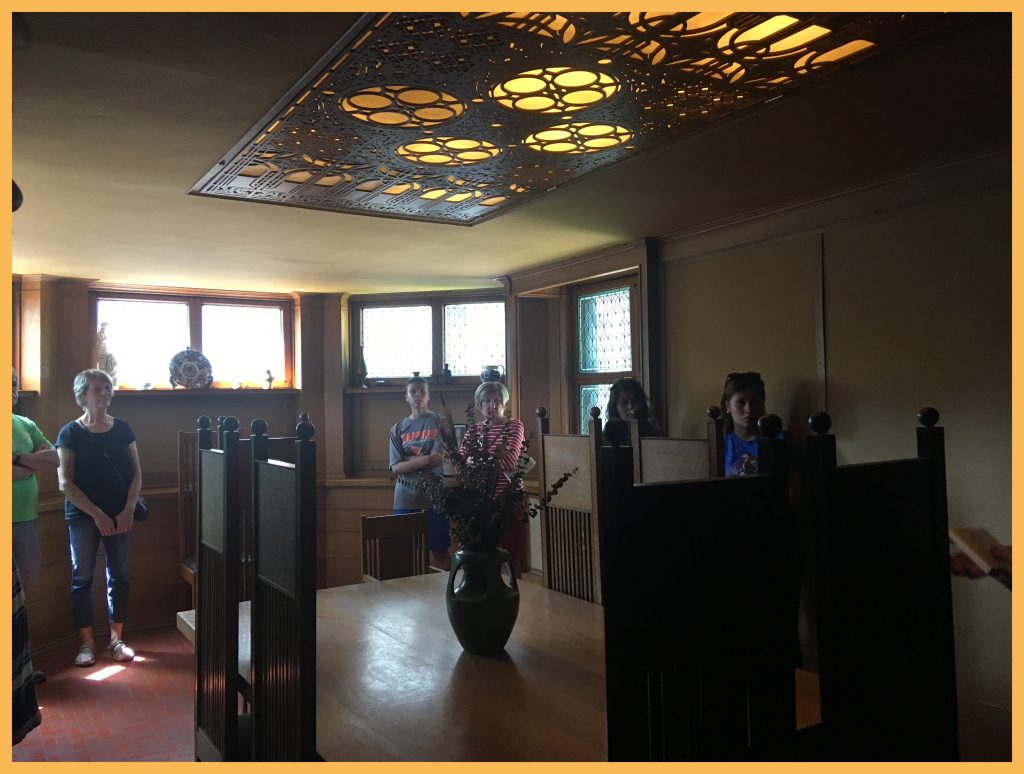 The family dining room features custom furniture that Wright designed for his family. While he and Catherine moved in as a young couple by the time they moved out, she had given birth to seven children.  The tall chairs were meant to make the table feel more intimate and as if the table were enclosed in a room-inside-a-room. Wright thoughtfully chose to cover the walls in canvas rather than paint to bring in natural elements and absorb sound. The room also featured an early example of inset lighting, as well as radiator covers which hid the homes heating system from view.

Frank Lloyd Wright’s master bedroom where he and his wife Catherine slept.

“Compress and release” is one of Wright’s signature design elements that appears throughout his home. In the master bedroom, Wright uses this technique to portray a sense of spaciousness and relaxation after entering from a narrow hall. The heightened walls also provide space for two murals which were painted by friend and artist Orlando Gianini. ­ 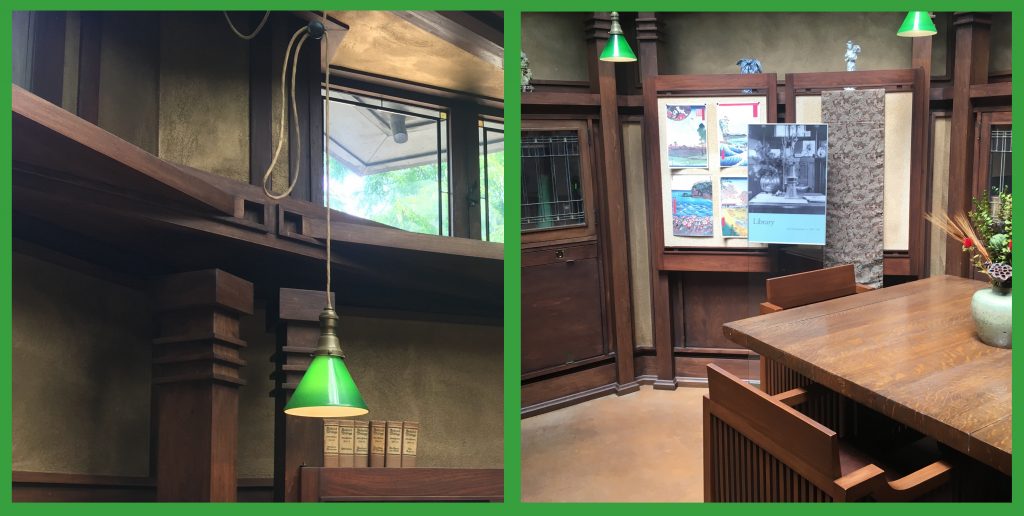 While designed as a community library, this room later turned into Frank Lloyd Wright’s more intimate meeting place in his studio.

In 1898, Frank Lloyd Wright added on a studio to his home as his independent career took off. The studio featured an entrance space where he would meet with clients, a large two-storey work space for himself and his Prairie School followers, and a smaller side room that was intended to be a community library. Unfortunately, the library was not  well used, so he later transitioned the space into an intimate private meeting space for clients. The room’s unique staggered corner details are said to have inspired the initial designs for the famed spiraled Guggenheim Museum.