Has Los Angeles Transformed into a Bike-Friendly City?

Less than 1% of Los Angeles residents biked to work in 2010. With bike infrastructure and bike share programs picking up speed, can the car-centric city turn itself around?

Since the 1980’s, Los Angeles has been known as one of the least bicycle and pedestrian friendly cities in the country. Before 2010, there were no marked bike lanes in the Downtown area. Some portions of primary roads were designated as “bicycle routes” and had posted signs, but no dedicated lane space marked for bicyclists. According to census data, it is estimated that less than one percent of Los Angeles residents biked to work in 2010.

At the other end of the spectrum, the city of Copenhagen declared in its Bicycle Account 2020 that its vision was: “to be one of the world’s most livable cities; a key element of this vision is being the best cycling city in the world.” Copenhagen experiences an average of 7 to 11 days of rain per month, every month throughout the entire year with relatively chilly winters as well. Despite the inclement weather, in 2010, 35% of trips to work or school were made by bicycle. This number increases to 50% when looking solely at Copenhagen residents. What makes these statistics even more impressive is Copenhagen’s car-loving past. The city’s streets were headed down the same auto-centric path as the United States after World War II and by the 1960’s Copenhagen experienced congestion and long vehicle commute times in and out of the city. So how did Copenhagen get so many people out of cars and onto bikes? By reconfiguring their transportation network to make cyclists feel safe, and by making cycling faster and more convenient than driving.

In 2011, the City of Los Angeles also had a vision to improve its bike infrastructure, and installed the first green bike lanes in the City on 1st Street between Boyle Avenue and Lorena Street. Today, the bike lane program continues to grow and even features buffered bike lanes which include additional space between the bike lane and car lanes. In 2016, Metro launched LA’s first bike share program with approximately 45 stations in the Downtown core.

In May of this year, I decided to try out the Metro Bike Share program to get from Union Station to my office at 9th and Hill Street. It’s about a 2.5 mile trip, with plenty of bike stations along the way in case I wanted to make a pit stop or ditch the bike early for some reason. I ride my beach cruiser almost daily for trips to the gym or around the neighborhood, but I wasn’t sure how easy it would be to adjust the Metro bike. And even more importantly, I wasn’t sure how comfortable I would be riding a bike in Downtown LA traffic. 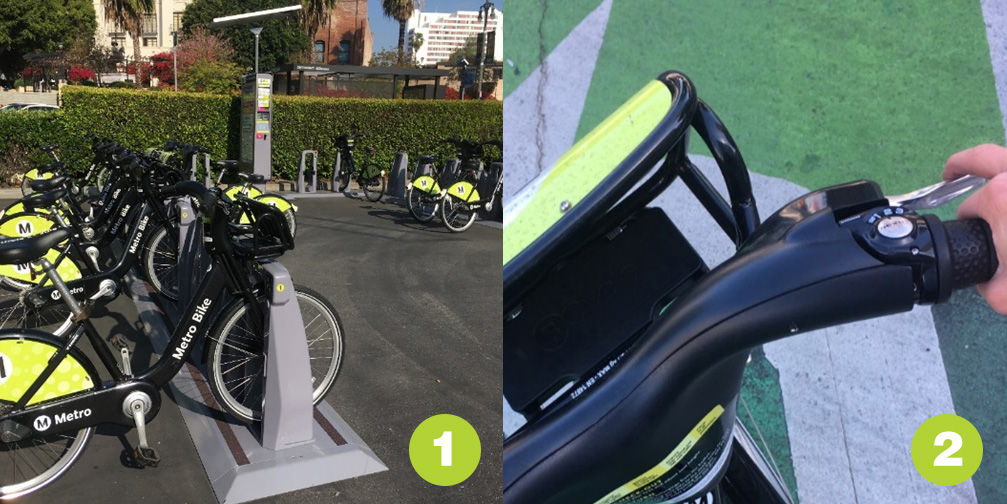 Bike around the City

I picked up a bike from the Union Station West Portal, and since I had already signed up for the Metro Bike Share app, it was a quick and easy process. To access the bike all I had to do was enter my phone number and the dock number of the bike I wanted. I did a quick inspection of the bikes before choosing one, which included pressing on the tires to check for flats and testing out the seat height mechanism. The bikes were surprisingly sturdy, and the seat was very easy to adjust to a comfortable height. Overall, I found the bikes to be user-friendly as well: with visible hand brakes and a gear shifting system on the right handle.

From Union Station, I rode onto Los Angeles Street. There is a bit of an incline from Alameda Street to the Olvera Street Plaza, but this segment is short it wasn’t unmanageable. There are buffered bike lanes on Los Angeles Street with bollards in the buffer zone, which made me feel protected and separated from adjacent street traffic.

During my first ride, there was construction on Spring Street between 7th and 8th Street that completely blocked the bike lane. In this segment, I had to merge into regular traffic lanes that were too narrow to ride next to a car. I could see how a bicycle rider could be uncomfortable in that situation, but fortunately it was only temporary, and the bike lane was open by the time I returned the next month.

I docked my bike at the Main & 9th station and walked two blocks over to my office building. At the end of my bike trip, a green light flashed and there are three beeps to signal that the bike has been properly locked when inserted properly in the dock. I also received a text message and an email to confirm that the Metro Bike had been returned.

At the end of the day, I grabbed another bike from the Main & 9th station and rode in the northbound buffered bike lane on Main Street. At 1st Street, I turned right and headed back to Los Angeles Street where just north of Temple, there is a Metro Rapid bus platform on the other side of the bike lane (figure 5). There is also a bike signal at the intersection of Los Angeles Street and Aliso Street to prevent conflicts between cyclists and vehicles turning right onto eastbound US 101 (figure 6). North of Arcadia Street, the bike lane is painted green and dashed to indicate that vehicles have to cross the bike lane to turn right onto the westbound US 101 onramp (figure 7 and 8). 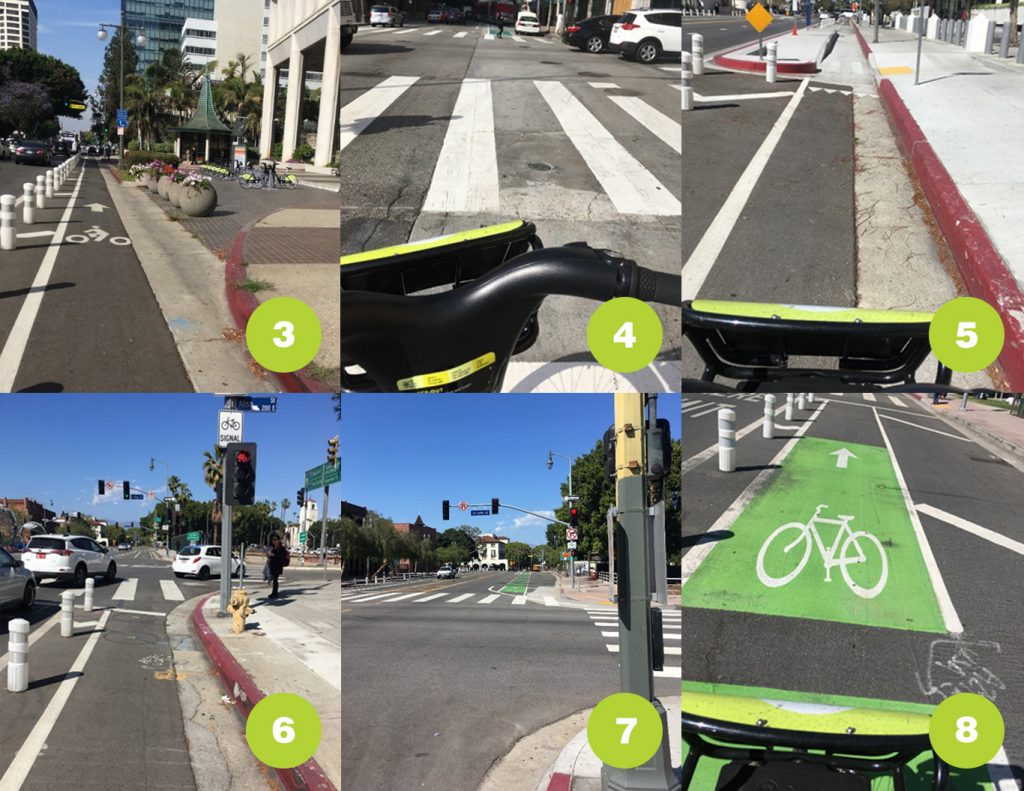 Figure 3: Buffered bike lane on southbound Los Angeles Street between Temple Street and 1st Street. Figure 4: Buffered bike lane on southbound Spring Street. Figure 5: Metro Rapid bus platform on the other side of the bike lane. Figure 6: Bike signal at the intersection of Los Angeles Street and Aliso Street to prevent conflicts between cyclists and vehicles turning right onto eastbound US 101. Figures 7 & 8: North of Arcadia Street, the bike lane is painted green to indicate that vehicles have to cross the bike lane to turn right onto the westbound US 101 on ramp.

Using the bike share from Union Station took 17 minutes on the bike and another 3 minutes or so to walk to my office. The cost was $1.75 each way for rides less than 30 minutes long. Catching the Metro Red Line from Union Station to Pershing Square Station would have cost $1.75, with a similar travel time of about 20 minutes including a 12 minute walk from Pershing Square. Metro Local Bus Line 40 goes from Union Station to a stop at Spring/9th in about 22 minutes and also costs $1.75 per trip. With similar time lengths and pricing, the bike share program is very competitive with other available means of transit. The Metro bikes are not as nice as my own, but the experience was much more pleasant than I had expected. Though I am not as bold as the Danes and would not attempt to ride a bike in the rain, Los Angeles is thankfully blessed with good weather year-round and my personal preference is definitely to travel by bicycle. As Los Angeles’s bike infrastructure was nearly non-existent ten years ago, it’s nice to see that the city is working on turning this around. The continual growth of LA’s bike-friendly infrastructure and positive feedback thus far will help create more and safer options for residents to enjoy the city by bike.

Lydia La Point is a Transportation Engineer with over 15 years of experience at IBI Group. She has been involved in the planning and engineering design of bicycle facilities (from Class I through Class III), parking facilities, street improvements, pedestrian facilities, bus rapid transit systems, light rail systems and intelligent transportation systems. In her free time, she loves to be outside on a hike or on a bike. 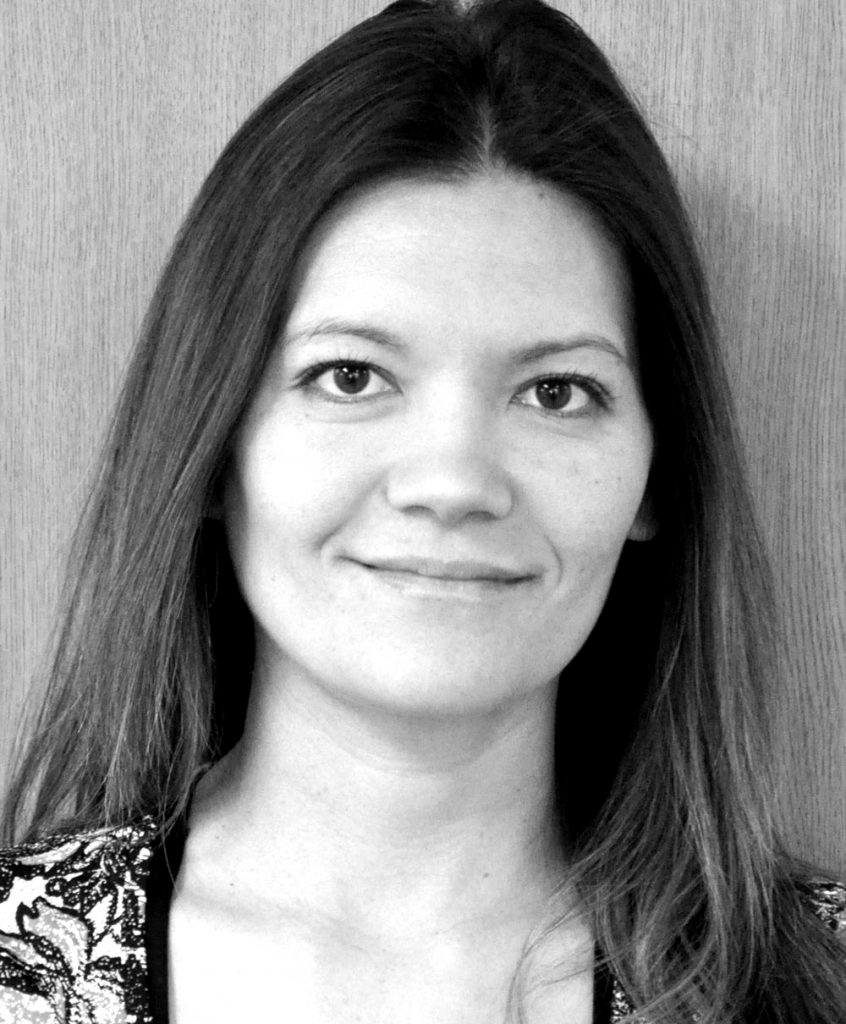