The Commercialisation of Higher Education

The Commercialisation of Higher Education (HE) has been in debate for over a decade. In recent years however, the gap between Higher Education Institutes in the UK and their staff and students has dramatically widened. Universities have been put under pressure by the changing education market to become agile and revenue generating whilst keeping themselves in the spotlight to prospective students.

There is a global consensus that Universities (some more than others) are treating the Education sector as a marketplace. Where students in particular are considered to be consumers rather than individuals looking to advance their educational attainment and future prospects. With institutions seen in this way by both their own students and the media, it has left the question ‘Do our Universities value profit over education’?

It appears that the increase in fees and the push on the unique selling points of each institution to gain higher student enrolment would support this theory. And it’s not just in the UK that commercialisation is a growing concern. The Guardian reported last year that the feud between institutions, their staff and current students is a global crisis.  Across Europe, North America and even Russia, the emphasis on commercialisation of education is rife. 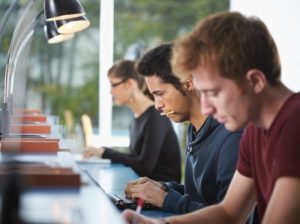 What impact is the commercialisation of Higher Education having on students’ experiences?

Universityworldnews.com published an article about a Russian survey conducted by Russian Presidential Academy of National Economy and Public Administration (RANEPA) Expert Analysis Centre, where 56% of participants had worked in the Education sector for over 15 years. The survey showed that the ‘…trend towards commercialisation is being driven (in Russia) by a combination of limited government funding and a growing demand for education’. 74% of survey respondents said that ‘an increase in salary [was] at the top of the list’ of priorities, despite the fact in mid-2015, teaching staff gained a 50% pay increase. This reaction strikes a secondary consideration to the question of commercialisation – Is the real issue about the validity that staff and students feel?

It is clear that the commercialisation of education has muddied the waters when it comes to what the true focus of an educational establishment should be. It is now thought that ‘every student is a customer, every professor is an entrepreneur and every institution is seen as a seeker of profit’ – David Hejwosz.

So how does commercialisation relate to the built environment of universities?

When considering the investment of built spaces on campus, commercialisation can have both a positive and negative impact. Thoughts on how much money is being reinvested into HE learning/teaching spaces, and how much is spent on staying competitive and attractive to future students are key areas for deliberation.

A Huffington Post article published at the end of last year showed how England’s universities are spending their finances. Although individually each institution’s spending differs, collectively it seems that more money is spent on revenue earning initiatives such as coffee shops, student unions, gyms and societies, than creating and maintaining technologically advanced and long-lasting educational spaces, like libraries, lecture theatres and seminar rooms. 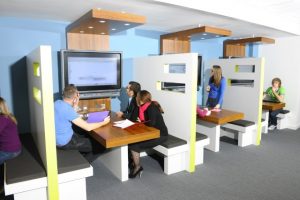 Universities are increasingly focusing investments in the built environment on revenue generating activities.

47% of the total income of England’s universities (£27.7 billion in 2016) was from undergraduate, international and “other” tuition fees. With a ‘total of £871 million’ spent on student unions, societies and sports facilities (etc…), this is over a £200 million variance to the ‘£630 million to run 390 libraries’. It is clear that there is a need to invest in keeping campuses attractive and engaging for students at the cost of designing and building educational spaces, but how relative is this when someone (in theory) can learn anywhere? For example, Faulkner University highlighted that ‘in 2015, 71% of academic leaders rated the learning outcomes from online courses as the same quality or superior to those from face-to-face classrooms.’

So how relevant is a significant investment in teaching spaces on campus?

The answer to this question, and whether the commercialisation of HE is truly all negative is arguable. Especially when 94 of the 130 abovementioned libraries are available to students 24/7 and these learning spaces come with the option to study in a multi-million pound specialised building, at any time that suits individuals in dedicated quiet zones, with a million volumes worth of knowledge on the shelves. These spaces are complimented by the commercialisation of other university facilities, for example, when a significant investment is made in revenue earning facilities, like sport and gyms. These particular locations provide a space that aids physical wellbeing, however non-profit investments such as counselling, and health services enable students to take care of themselves emotionally and mentally.

In conclusion, it seems that the commercialisation of Higher Education has many contributing factors. Universities are pushed to differentiate themselves from their competition by investing in their campuses, both to provide a unique ‘product’ and experience to potential students, as well as supplying outstanding teaching and learning spaces. Roger L. Martin, institute Director of the Martin Prosperity Institute at the University of Toronto, highlights that it isn’t always by choice that educational establishments become so heavily invested in revenue generating facilities. But instead the influence of a changing marketplace and government forces play a strong role in the commercialisation of Universities. However the amount of investment universities are applying in areas other than the direct education of their students, and the pay of their staff still raises a cause for concern amongst many. Nevertheless, specialist educational spaces and the built environment of campuses are arguably still extremely important to the success and wellbeing of both students and staff alike.