Convenience or Chaos? The Rise of Dockless Bike-Sharing

At this point, bicycle-sharing systems are not a new idea to the majority of people living in the North American cities. By reviewing a world bike-sharing map, you can see there is a long list of cities with bike-sharing programs in the US, China and the Western Europe. How quickly bike-sharing has become standard in...

At this point, bicycle-sharing systems are not a new idea to the majority of people living in the North American cities. By reviewing a world bike-sharing map, you can see there is a long list of cities with bike-sharing programs in the US, China and the Western Europe. How quickly bike-sharing has become standard in a modern city may not make you feel surprised- unless you’re from Canada. Currently, Vancouver, Montreal and the Greater Toronto Area, are the only three major cities with bike-sharing programs. Adoption of these systems has been slow, though some small and medium-sized cities like Victoria, BC and Kelowna, BC are beginning to test bike-sharing systems. There are certainly less cities and metropolitans in Canada than in the US and China, but is it also possible the Canadians are just not big fans of bike-sharing? Are there factors, such as the tough weather conditions, the inadequacy of bike-related infrastructure, and an auto-oriented lifestyle that have led to this situation? Encouraging the development of active transportation (which includes walking, cycling, and public transit) has been a trend of current urban transportation planning for cities all over the world; Canadian cities may need to embrace the appearance of more and more bike-sharing services in the near future.

Is the solution dockless bike-sharing? Could this be the model that is finally adopted by Canadian cities?

Dockless bike-sharing was first deployed in Europe in the mid 20th century as an “anarchist provocation” against ownership. Now 60 years later, China generated a huge domestic dockless bike-sharing market, with the most registered users of any bike-share in the world.  Starting in 2014, Mobike and Ofo, the two biggest dockless bike-sharing services in China, as well as countless similar companies, became widespread in major Chinese cities like Beijing and Shanghai. After fierce and brutal market competition in the past three years, both Mobike and Ofo have raised billions of US dollars in funding from powerful Chinese high-technology companies like as Tencent, Xiaomi, and DidiChuxing.

Now these two ambitious companies are moving their battlefields overseas, by extending their services to cities across Europe and North America. In 2017, Ofo had more than 10 million bikes in 250 cities and 20 countries, with more than 62.7 million active users. This bike-sharing service was valued at $3 billion. It’s primary competitor, Mobike had more than 6 million bikes in 160 Chinese cities and had also expanded to many countries abroad. Today, Mobike has more than 100 million active users and was also valued at $3 billion. Mobike and Ofo’s logos can be found across the continents: from Sydney and the Gold Coast in Australia, to Japan, Singapore, and Malaysia in Asia; from London, Milan, Berlin. and Rotterdam in Europe, to Washington, DC to Seattle in the US. It was reported that Toronto will be Ofo’s first Canadian city to run a pilot project. If it goes well, we can expect dockless bike-sharing services from these two Chinese companies across Canada in the near future. 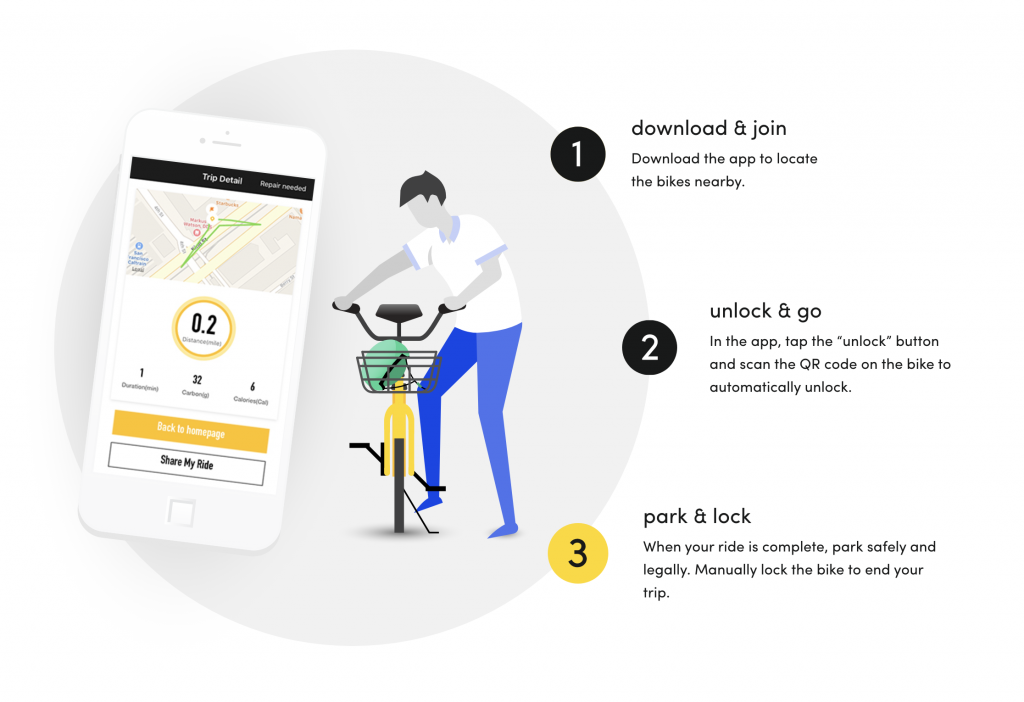 Based on the popularity in China and several successful cases in European and America, dockless bike-sharing has many advantages over traditional bike-sharing services. These include flexible pick up locations, a significant number of “stations”, and the ease to park the bikes anywhere. As a dockless bike-sharing user, one simply needs to download an app and sign in. This app usually includes a fancy map with GPS to help users to navigate their environment and find the nearest bike. This app is used to scan and unlock the QR code on the smart lock attached on the bike. At their destination, the user can leave the bike at any convenient public space, instead of searching for a dedicated docking station. The fee to use the bike is also integrated into the smartphone app.

But does dockless bike-sharing always work well? Can we conclude that this dockless bike-sharing trend, that developed in population-dense China, will have similar benefits to the people living in the US and Canada? China has had a long history of bike-riding throughout the last century, while transportation development in North America has mainly been based on the automobile industry. Compared to the Chinese, North Americans may need a longer time to get used to biking as a part of their commuting lives.

China has many conditions which show how dockless bike sharing can help solve the “first and last mile” problem. With big urban areas and well-developed but inflexible public transit systems, such as subways, light rail, and Bus Rapid Transit (BRT) systems, there is often a gap between a user’s destination and the transit system. This is referred to as the “first and last mile” problem. Dockless bike-sharing, with it’s great flexibility, can help solve this problem by linking public transit stations and travellers’ final destinations in the area within 1 mile away from the stations.

Recently, there were negative reports circulation about the massive size of China’s bike-sharing market. These reports claimed that there are not enough regulations to control the number of bikes on the market, and that the supply is currently far greater than the demand. For example, transportation officials and experts claimed that Shanghai has over 100 million dockless bikes in operation, but that the city could only accommodate 60 million bikes on the roads. Additionally, bike-sharing users left bikes in locations that clogged the sidewalks, making them no longer fit for pedestrians. The piles of bikes that were illegally parked everywhere in the city rapidly shrank the number of public open spaces.

Does dockless bike-sharing create convenience or chaos? Are we ready to embrace more of these flexible systems in North America? Or should we say “no” to these new systems and their problems, like Seattle and Manchester have recently done? There is not yet a dominant dockless bike-sharing market leader in North America, and the competition could force local providers to provide good services- that is the silver lining we would like to expect. In reality, no matter how dockless bike-sharing systems are developed in the next couple of years, provider guidelines are going to be needed. Maybe regulations and new-technology can work together to help control and improve the services of dockless bike-sharing system, such as proposing “preferred parking zones” on the app’s attached map, with the corresponding enforcement to execute for bike-parking.

Photo by zhou shuai on Unsplash