Written by Alyssa Koehn It’s likely you’ve seen an e-bike on a local roadway and not noticed that it was any different; while some e-bikes are clearly motor powered, many of these bikes integrate an electric motor seamlessly into the basic mechanics of a standard bicycle. The added motors can function to assist the bicycle in...

It’s likely you’ve seen an e-bike on a local roadway and not noticed that it was any different; while some e-bikes are clearly motor powered, many of these bikes integrate an electric motor seamlessly into the basic mechanics of a standard bicycle. The added motors can function to assist the bicycle in two ways, creating two different classes of e-bikes:

It is this second class of motor-assisted e-bikes that is surging in popularity across Europe, but is being chased off the streets of New York City. Why are some cities embracing the e-bike while others are crafting laws to prevent their use? Are the streets of Manhattan and Paris so different that e-bikes should clearly be welcomed on one but banished from the other? 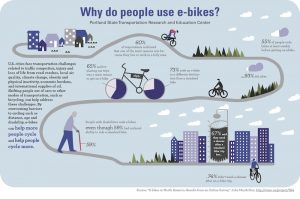 While electric bicycles are legal for sale across America, some states (like New York) have their own rules on their usage- it’s legal to own an e-bike in New York City but not to ride it. According to Bicycling.com, the current crackdown by the Mayor and NYPD is tantamount to war on the e-bike; the City is levying large fines and attributing this work to part of their Vision Zero program. One of the big concerns is that it is difficult to quickly tell the difference between a hand throttle and pedelec model; this means that all electric bikes are being caught up in the crackdown rather than just the “motorized scooter” like model.  According to CityLab, the reason for the crackdown is because of these bikes association with recklessness on the road:

“In a city where the NYPD seized 687 bikes in 2017 alone, the vehicle has become associated with reckless riding, often synonymous in the public mind with low-wage delivery workers who use the e-bike motor’s extra push to manage the physical pressure of long, poorly rewarded shifts. E-bike riders have thus become a perversely prominent target for enforcement of New York’s Vision Zero initiative for ending all traffic deaths.”

Across the Atlantic, in Paris, e-bikes are being embraced on local streets. Newly developed models are about to be integrated into the municipal bike share program Vélib’. An article on BikeEurope, quoting the operator of the bike share system, Smoove, speaks to the changes and how easy it is to transform an ordinary bike into an e-bike,

“Smoove also announced that 30% of the bikes will have an electric Bafang front wheel motor. Limited to 25 km/h, the Vélib’ e-bike will have a range of approximatively 50 km and weight 25 kilos. As Jorge Azevedo, CEO of Smoovengo, said “It’s possible to electrify the mechanical model easily by changing the front wheel, adding a battery and put on a new color. The electric model is blue and the regular bike is green. This refitting operation can be done in 30 minutes.””

And it’s not just Paris. Oslo has recently offered to contribute to their citizen’s purchase of an electric cargo bike, in a hope that a motorized bike with the ability for storage may convince more passengers to swap their vehicles on shorter trips. The subsidy is worth it for the improvements it would bring to Oslo’s air quality. All across Europe, e-bike sales have been surging.

Electric bikes greatly reduce some of the barriers to entry for cycling. The assisted power reduces the physical burden of pedalling and allows the user to travel greater distances or more easily transport belongings. And as mentioned in the Oslo example, if an e-bike makes a driver more likely to take their trip on bicycle instead of motor vehicle, they can greatly reduce carbon emissions. e-bikes are a fantastic incentive to make the switch from car to bike.

While fully motorized e-bikes could have greater safety concerns than the average bicycle, the pedelec modal is unlikely to cause any greater danger than a standard bicycle in traffic. With all the benefits of this bike being captured in Europe, will New York be able to figure out it’s legality issues and re-configure it’s management of these bicycles?

Photo by Luca Campioni on Unsplash