Falling from the Skies – Drone Delivery

How futuristic drones seemed in Back to the Future II, which released in 1989. Fast forward 27 years, and that very future doesn’t seem too far off. Drones that walk dogs have moved from the silver screen to the cul-de-sac (that poor, poor dog). One more productive way we will be using these drones are...

How futuristic drones seemed in Back to the Future II, which released in 1989. Fast forward 27 years, and that very future doesn’t seem too far off. Drones that walk dogs have moved from the silver screen to the cul-de-sac (that poor, poor dog). One more productive way we will be using these drones are for the delivery of lightweight goods. There is no shortage of companies working to bring this technology from the concept stage to offering it as a standard service.

In late 2013, Amazon unveiled their Prime Air concept in a 60 Minutes interview, promising doorstep delivery of your lightweight Amazon package by drone in 30 minutes or less. At the time, Amazon CEO Jeff Bezos optimistically predicted Prime Air would be available to hit the skies in 4 to 5 years. It’s been two-and-a-half years since the interview, and Bezos’ prediction may be on point. Before the first Prime Air delivery flight takes off, however, regulations for unmanned aerial vehicles (UAV) will need to be hashed out by all participating governments.

Avoid Obvious Architects with Tetra Architects and Planners see the movement of goods by drone as an opportunity to reduce pollution and traffic in Shenzhen, China. The goal is to remove all transport trucks from roads in the area, which they expect would lead to a dramatic reduction in pollution and congestion. As a part of their proposed highway design, all vehicles will be in an enclosed highway tube, designed to control pollution, while the air space above the highway tube will be designated for drone delivery vehicles. 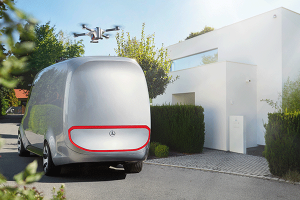 In early September 2016, Mercedes-Benz, in partnership with American startup Matternet, released a concept van that proposes to change the way companies execute last-mile delivery. The van acts as a mobile warehouse which houses a fully-automated cargo management system. This system brings packages to one-of-two fully automated drones that are docked on the roof of the electric vehicle. The drones are able to transport anything under 2 kilograms/4.4 pounds to destinations up to 20 kilometres/12 miles away. Thanks to this holistic delivery system, the driver will be able to make her/his deliveries in a fraction of the time. Check out the promo video here.

While there are many exciting drone delivery technologies in development around the world, and you can already have your food delivered by drone in Shanghai, if you live in North America or Europe, it will be some time before you have your next package dropping from the skies in your backyard. In a Forbes.com article, Rick Rys of ARC is quoted as saying, ‘Europe is still developing drone regulations, making it difficult to start commercial drone operations there.  In the US…drone use is restricted to visual line of sight.  This means companies like Amazon, who have explored using drones for delivery, cannot use the FAA part 107 rule.  Amazon and others will now find it all but impossible to use drones for fulfillment until drone traffic control is developed and the FAA figures out how to regulate that.’ Until these regulations are finalized, you will have to rely on the old school, dependable way of ground delivery.