From timbre towns, to robot construction, check out some of our favourite reads from the web this month.

Like many parents in New York City, Malaysia Goodman had no option but to carry her baby daughter and her stroller down the subway station stairs. On January 30, Goodman lost her life after falling down the stairs of the 7th Avenue subway station doing just that. The station, like three-fourths of New York’s subway stations, had no elevators. Disability-rights advocates have been trying to draw attention to this problem for years, but after the death of Goodman, Mayor Bill de Blasio and NY Governor Andrew Cuomo promise to speed things along. This tragic incident brings attention to just how unfriendly most public transportation systems are for parents. Historically, stations were designed to move the commuter class to and from work- a group made of able-bodied while men working 9-5 jobs. Today, women account for the majority of public-transit users and the majority of caregivers as well. While the MTA has seen a rise in female leadership over the last few years, transportation leaders in power generally do not reflect the communities that they serve.

In a February 14 Project Update, Google’s Sidewalk Labs unveiled the official design for their Quayside re-development. If approved, this project will set the stage for a possible future of urban development, defined by technology, mass timber, modular pavement, and social connection among others. Sidewalk Labs aims to build the 12-acre neighborhood using 100% mass timber construction, which would be the most sizable project for this re-emerging industry.

Why the Case Against the Obama Presidential Center is so Important

Seductive designs aside, Google still has a way to go before they win public approval for their data-collecting neighborhood. People are rightfully questioning the corporation’s intensions and remain unsure if Sidewalk Labs is really centered on improving public life, or furthering Google’s own private advances. Between this project and Amazon’s HQ2 kerfuffle, the public is growing more vocal of their discontent with large-scale closed door negotiations on public life. The Obama’s prospective presidential library is at the frontlines of this growing economic development debate. The Obama Foundation has its eyes set on developing its library on top of 20 acres of Chicago’s National Register-listed and Olmsted-designed Jackson Park, which the organization Protect our Parks is arguing should be protected under the city’s public trust doctrine. The city mayor argues that it’s time to find “more economically productive uses for land”, but should profit-driven endeavors trump all urban priorities? 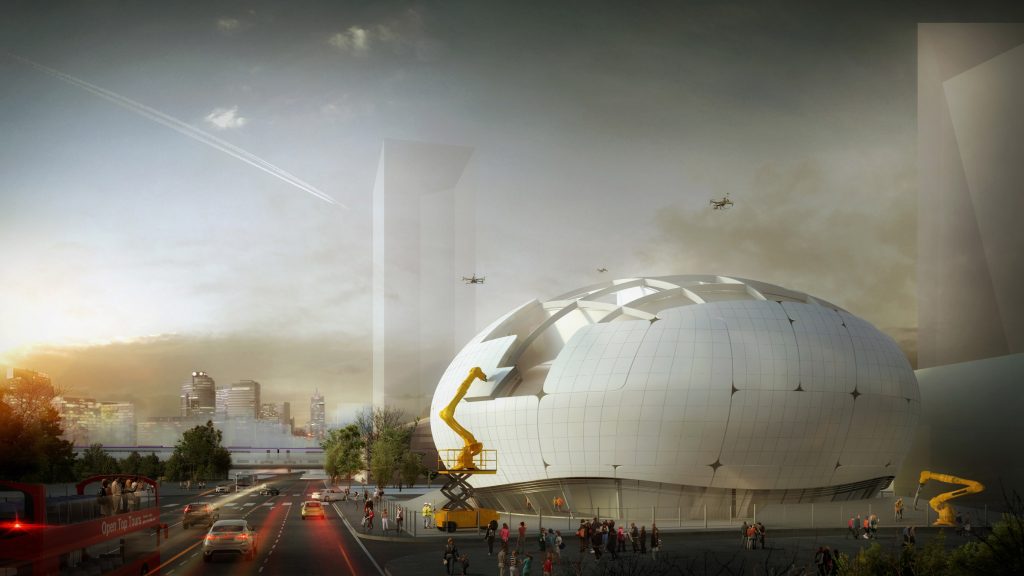 Maa Melike Altinisik Architects have designed a robotics museum in Seoul that will use robots throughout the construction process. Visualisation by Ediz Akyalçın.

Talk about putting your money where your mouth is! The Seoul Metropolitan Government has commissioned Melike Altınışık Architects to design a robotics museum in the nation’s capital city. According to the article, the building’s façade will be molded, welded, assembled, and polished by robots, in addition to the concrete plaza surrounding the museum. Drones will be used to address mapping, site inspection, and robotics management, showcasing a strong argument for the potential of robotics long before the museum opens.

Cities are bogged down by policies and stakeholders that make the transition to smart cities easier said than done. So where can we can test these technologies in the real-world? Look no further than the university campus. Many universities function like mini-cities, with their own roads, residences, infrastructure, and networks- plus a whole lot of innovators capable of turning these ideas into action!