Food Deserts: A Problem on their own or a Problem of Inequality?

Are food deserts a problem of geography? Should we better distribute access to fresh food, or would tackling income inequality better solve this problem? According to an article by Richard Florida, geography matters much less than the larger problem of inequality. There has been a lot of efforts to tackle the issue of food deserts,...

Are food deserts a problem of geography? Should we better distribute access to fresh food, or would tackling income inequality better solve this problem? According to an article by Richard Florida, geography matters much less than the larger problem of inequality. There has been a lot of efforts to tackle the issue of food deserts, including part of the popular “Let’s Move” initiative by former First Lady Michelle Obama. But would our efforts be better spent ensuring that families are better equipped to afford food, even if it’s further away from their home? 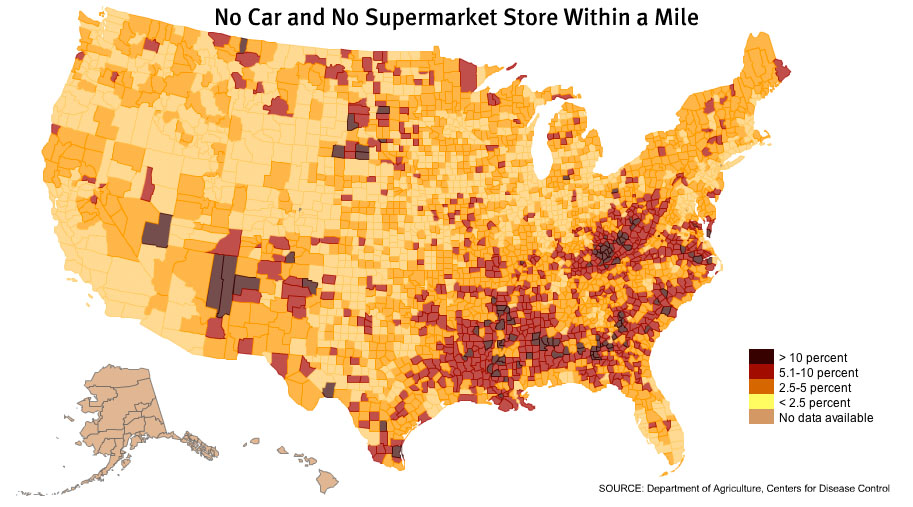 The United States Department of Agriculture (USDA) defines a food desert as “parts of the country vapid of fresh fruit, vegetables, and other healthful whole foods, usually found in impoverished areas. This is largely due to a lack of grocery stores, farmers’ markets, and healthy food providers”. The argument has traditionally been than in order to improve public health, we need to first improve public access to healthy foods. Speaking to NPR on this issue, Michelle Obama said:

“We can give people all of the information in the world about healthy eating… but if parents can’t buy the food they need to prepare those meals… if their only options for groceries are in the corner gas station or the local mini mart, then all of that is just talk… and that’s not what Let’s Move is about,”

But Richard Florida has countered this argument in a new article on The Atlantic. Florida doesn’t deny that food deserts exist, but cites new evidence that they are only a minor part of the problem. He says:

“A new study by economists at New York University, Stanford University, and the University of Chicago adds more evidence to the argument that food deserts alone are not to blame for the eating habits of people in low-income neighborhoods. The biggest difference in what people eat comes not from where they live per se, but from deeper, more fundamental differences in income and, especially, in education and nutritional knowledge, which shape people’s eating habits and in turn impact their health.”

He cites research that shows while higher income families have significantly healthier shopping habits, they spend 91 percent of their shopping dollars at grocery stores, while low income families spend only slightly less, at 87 percent. He also shows that both low and high income families that live in food deserts have similar habits in how far they travel to the grocery store. In urban food deserts, where low income residents are less likely to own a vehicle, they tend to travel less than 2 miles to reach a grocery store. What issue then should we be tackling to best ensure all citizens have access to high quality foods? Is it geographic access, as previously thought, or is it education and income that makes the biggest difference in ensuring families are eating healthy foods?

Photo by Megan Hodges on Unsplash