Rust belt renaissance
Rust belt renaissance
Driverless cars are now available for public use in the United States. Which city has taken this bold step and doubled down on its commitment to innovation? San Francisco, Seattle or Silicon Valley perhaps? No, it’s Pittsburgh, Pennsylvania. The announcement came only weeks after the US Department of Transportation announced Columbus, Ohio as the winner...

Driverless cars are now available for public use in the United States. Which city has taken this bold step and doubled down on its commitment to innovation? San Francisco, Seattle or Silicon Valley perhaps? No, it’s Pittsburgh, Pennsylvania. The announcement came only weeks after the US Department of Transportation announced Columbus, Ohio as the winner of its $50M Smart City Challenge, beating out six other cities including established innovators such as Denver and Austin (and San Francisco, of course). Two major steps in urban innovation coming from America’s Rust Belt in less than a month! What’s happening in the heartland?

Earlier this year, The Economist identified three factors supporting a rust belt revival: old industrial skills are acquiring new relevance, cheap property as a vital asset, and the rise of manufacturing entrepreneurs. These factors came together in Columbus, where a long history as a manufacturing and logistics hub is helping to propel a turnaround, after decades of decline. Two additional factors help to further explain the boost across the region. The first, which The Economist mentions, is the presence of top universities and research programs in towns and cities across the country. This is evident in Pittsburgh, where the Carnegie Mellon National Robotics Engineering Center proved to be of major interest to Uber. Second, Jane Jacobs once said that, “New ideas need old buildings.” Now, in many thriving cities, old buildings are preserved for heritage, limiting their capacity for new ideas. Beyond that, even nondescript or unloved buildings are too expensive for new ideas in many of today’s shiny, top-tier cities. However, Jacobs’ observation remains true on a broader scale. In many cases today, new ideas need unloved cities. And cities that have faced 20+ years of decline are waking up to these opportunities. Recognizing that there will be internal competition, some states have sought legal changes to become more appealing. In Michigan, this includes legalizing fully driverless cars, which is set for debate in the state senate. 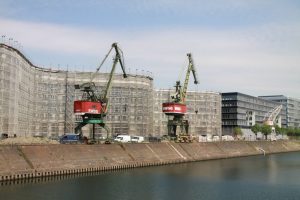 Renewal of industrial infrastructure in Duisburg, located in the Ruhr Valley

By strengthening traditional economic attractants like high quality education, enhancing strong industry connections and establishing appealing legal frameworks, along with the promotion of creative class measures like refurbishing former factories as lofts, Rust Belt cities have many of the ingredients for a major revival. These lessons aren’t just for (and from) America’s heartland, either. Hamilton, Ontario; the Ruhr Valley in Germany; and Lodz, Poland are all applying similar lessons to orient themselves towards 21st century economies. These regions (and others like them), still face many challenges; however the sparks to catalyze an economic renewal are beginning to fly once again.