Concrete base slab construction was speeding along during the hot summer months of 2017 at the Mount Dennis Station – one of the two terminus stations on the Eglinton Crosstown LRT (ECLRT) in the City of Toronto, Canada. The ECLRT Project represents the largest transit expansion project in Canadian history, with a $5.3 billion investment from both the federal and provincial governments. 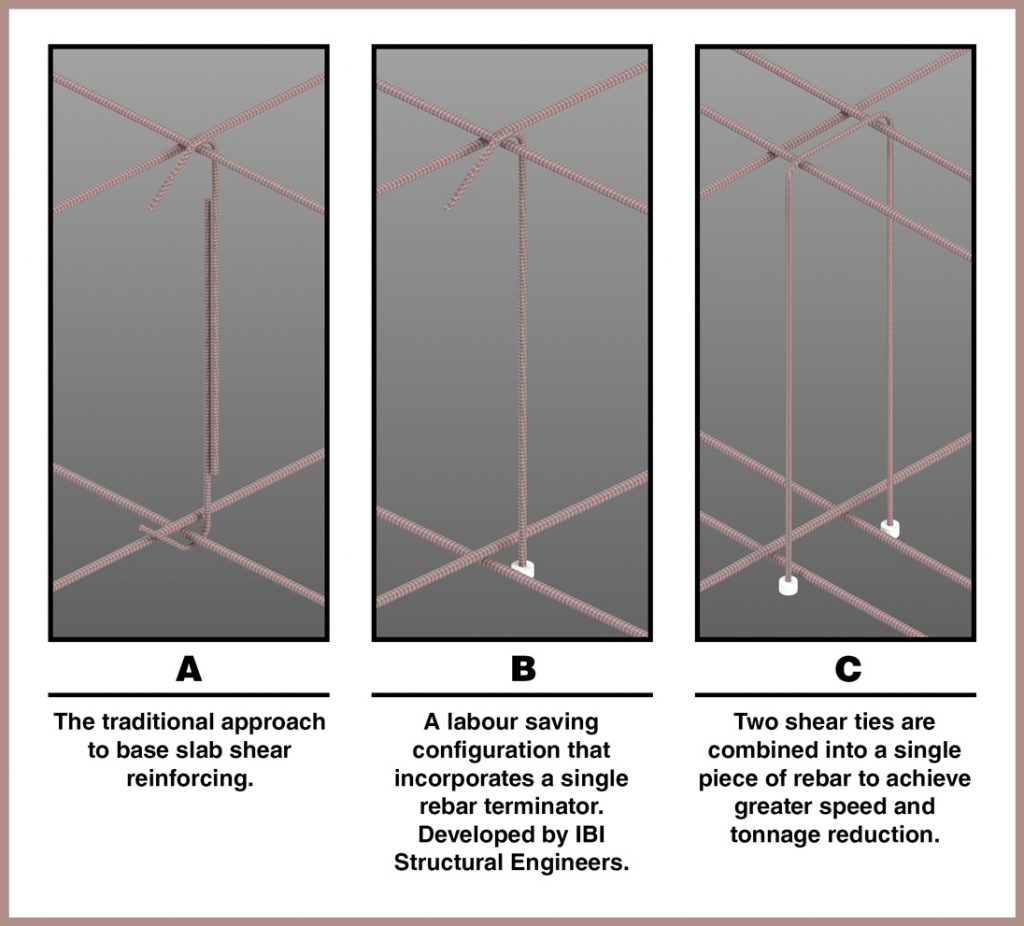 IBI structural engineers, general contractor, Crosslinx Transit Solutions, and rebar supplier, Harris Rebar were engaged in discussions on various strategies to meet the aggressive schedule. The traditional approach to base slab shear reinforcing requires the two pieces of 135-degree hooked bars to be lap-spliced at the middle, necessitating in-situ assembly of the two components. The installation of the shear ties often requires the worker to climb inside the reinforcing cage- a claustrophobic environment bound by dense meshes of rebar above and below.

A design incorporating rebar terminators was quickly developed and pressed into use. The initial design replaced the two hooked bars with a single hook coupled with a rebar terminator on the opposite end. The design also reduced the number of required tie-off points from three points (top-middle-bottom), to a single point at the top. Shear tie installation time was improved substantially due to the simplified installation procedure as well as the improved material logistics. The design was further refined subsequently by combining two ties into a U-shaped bar, creating a dramatic improvement in efficiency compared to the traditional approach. The cost incurred with the rebar terminators pales in comparison to the schedule compression afforded by the technique.

After successfully applying the detail to the base slab, the same approach was used to construct the precast tunnel units. The heavily reinforced tunnel units were assembled at the Con Cast Pipe casting yard in Puslinch, Ontario. The tunnel extends the light rail alignment westward from Mount Dennis Station under the Toronto-Georgetown railway corridor. The U-shaped shear reinforcement with two rebar terminator was used throughout. We were able to achieve a 20% reduction in the overall reinforcing steel tonnage as well as a 50% reduction in the reinforcing cage assembly time compared to a tunnel unit assembled without the detail.