New York City Architecture: As Diverse as the City Itself

New York City architecture is as varied and diverse as the people who live there. With a wide range of architectural styles spanning distinct historic and cultural periods, New York City has amassed one of the greatest collections of buildings in the world. The Big Apple’s fascination with architecture pre-dates its recognition by the U.S....

New York City architecture is as varied and diverse as the people who live there. With a wide range of architectural styles spanning distinct historic and cultural periods, New York City has amassed one of the greatest collections of buildings in the world. The Big Apple’s fascination with architecture pre-dates its recognition by the U.S. Census Bureau as the largest major city in the U.S., published in 1790. While almost every style of architecture exists within New York City, we’ll focus on the most prevalent periods.

The first style associated with New York City architecture is Neoclassicism, spanning 1780-1820. The most common features of Neoclassical style are colonnades and arches. Façades are almost always brick or stone and the overall building design usually follows the pattern of the classical column: a pronounced base with a ceremonial entrance, a uniform shaft with little decoration, and a pronounced top. Variations of the style include: Federalist, a traditionalist approach influenced by the architecture in England; Idealist, a moral approach, stressing symbolic and associational values; Rationalist, emphasizing classic building techniques; and Greek Revival, which focuses heavily on associational values. Famous examples of Neoclassicism are St. Peter’s Church, Federal Hall, and LaGrange Terrace (Colonnade Row).

From 1818-1850, a variation of Neoclassicism, Greek Revival, ruled American architecture and became the first truly national style in the U.S. The style’s strong ties to classic tradition and democracy resonated with New Yorkers, contributing to its wild popularity across the country. Cushman Row, the Brotherhood Synagogue, and the Friends Meeting House are a few examples of Greek Revival styling.

Gothic Revival, circa 1820-1860, is similar to Greek Revival in that it possesses strong associational values, but rather than tying into politics the style included associations to religion and nature. Extremely ornate, with the hope of instilling goodness within the wicked, this style is famously associated with churches but was also used for residences. Famous structures exemplifying Gothic Revival are St. Patrick’s Cathedral, Trinity Church, and Tavern on the Green. 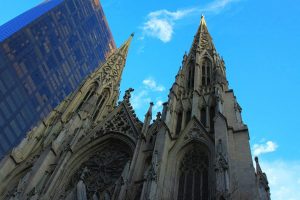 St. Patrick’s Cathedral reflects the Gothic Revival style that was popular between 1820-1860

The period 1860-1880 saw Second Empire Baroque’s succession of Gothic Revival. French by origin and named for the second empire of France, the style had a huge impact on NYC architecture. Particularly influenced by the additions to the Louvre during the 1850s, the style was widely used for public and residential architecture throughout the city. The styling, itself eclectic, most notably contained baroque elements combined with mansard roofs and low, square based domes. Quintessential Second Empire buildings in New York include The Plaza Hotel, The Gunther Building, and The Waldorf Astoria. 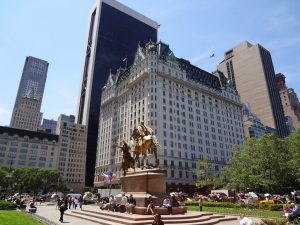 French influence on New York City architecture continued through the early 1900s with the Beaux-Arts Classicism movement. The Beaux-Arts style, from about 1890 to 1920, inflated classical allusions to truly super-grandiose proportions, as is evident with the architecture of Grand Central Terminal, the Custom House at Bowling Green, and the New York Public Library. The Beaux-Arts era was coupled with the closely related Second Renaissance Revival, which focused on the orderly aspects from the Italian Renaissance. Carnegie Hall, New York City Hall, and The Federal Reserve Bank of New York are a few buildings representative of Renaissance Revival style. 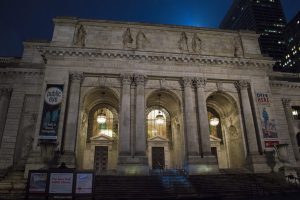 The New York Public Library, a landmark of the city’s Beau-Arts architecture

One Beaux-Arts building in particular, The Equitable Building, located in lower Manhattan’s Financial District, is responsible for ushering in what is perhaps the most defining era of NYC architecture, the setback style era, which birthed the skyscraper. A zoning law passed in 1916 required buildings to have a series of setbacks in order to reduce the shadowing effect caused by significantly vertical structures. This ‘wedding cake’ style architecture was immensely popular from the 20s through the 60s and is almost exclusive to New York City. The Chrysler Building, Radio City Music Hall, and The Empire State Building are but a few examples of the city’s setback style buildings. 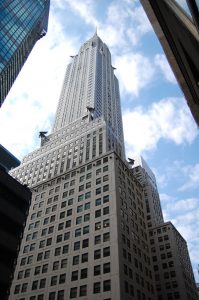 The Chrysler Building: One of many New York City buildings with setback-style architecture

The setback style of the early 20th century eventually evolved to become Art-Deco, which circled back to the use of ornate details indicative of the architecture styles that preceded it. The latter half of the 20th century, however, made a switch to International Style which utilized a ‘match box’ shape and had simplistic features. Famous International Style buildings include Trump Tower, Madison Square Garden, and the World Trade Center Twin Towers.

The history of New York City architecture is as much of a melting pot as its residents themselves. The various styles and rich history of the buildings were influenced from all over the world and is embedded into the very makeup of the city. The skyscraper, emerging at the beginning of the 20th century redefined the city’s skyline, literally bringing it to new heights. New York continues to be a place where ideas turn to reality, are challenged, and reimagined just as the buildings that comprise this great city have been.