Celebrating 70 Years of the NHS: A Look into the Future of the National Healthcare Service, 1980-2023

The
The
On July 5th 1948, of the NHS was founded, marking the country’s greatest achievement in modern social reform. 70 years later, we look back at some of the key moments in history of the NHS.

This article was written in celebration of #NHS70, marking 70 years of the National Healthcare Service. Click here to read part one in this series.

With the “Nucleus” hospital programme in full swing, the late 1980s was characterised by a culture of process driven results. If the process was quick and efficient (and therefore inexpensive), then the resulting environment would also be satisfactory. Inevitably, this proved not to be the case and rising expectations not only of the quality of care provided by the NHS but also of the facilities rapidly began to eclipse and the spirit of optimism originally generated by the establishment of the NHS. 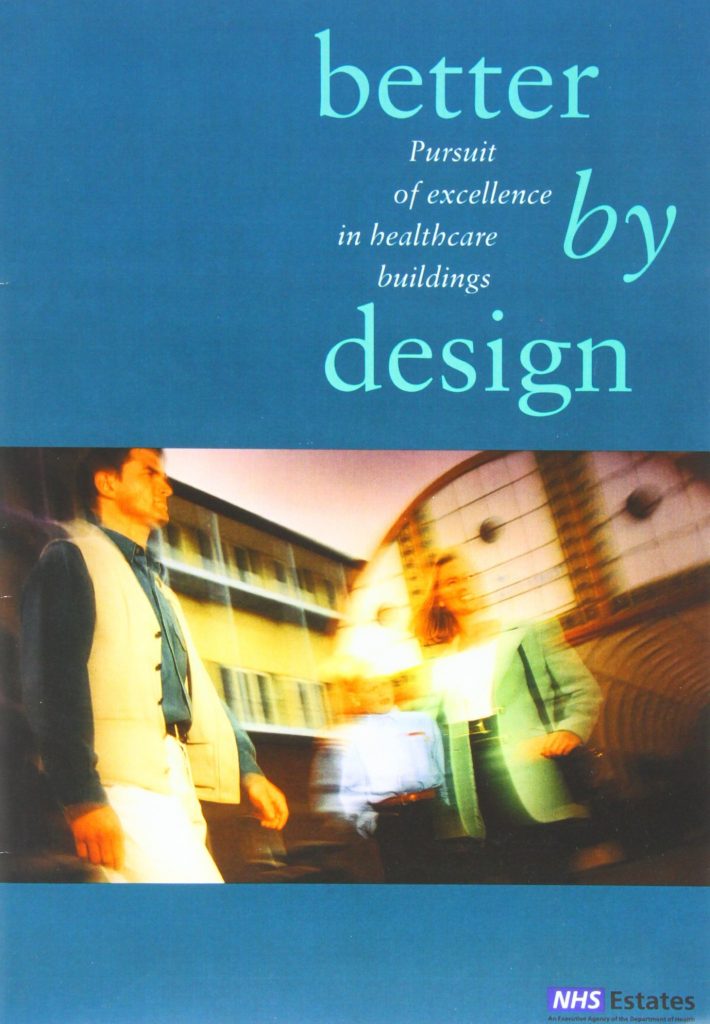 Better by Design: pursuit of excellence in healthcare buildings written by Mike Nightingale and published by the NHS. Click here to view larger image.

Although the reasons for the impoverished quality of much of the nation’s public sector building stock, including its hospitals, frequently lay outside the control of architects. Many factors contributed to their unsuitability. Poor management, neglect of basic maintenance and repair, sheer lack of financial resources, and the growth of ‘consumerism’ all encouraged visionary architects to embrace the concept of patient-led design in the delivery of more humane healthcare environments.

In 1989, Mike Nightingale established Nightingale Associates (now IBI Group) with the primary objective of promoting design excellence as the optimum means of satisfying user needs. Nightingale was the author of “Better by Design: pursuit of excellence in healthcare buildings”, a design guide which was endorsed by the NHS and distributed to all NHS Trusts in 1994. He foresaw the benefits of investing in a design research and innovation team with the aim of leveraging the intellectual capacity of the entire practice to develop fresh perspectives and ideas. This program still carries through today at IBI through as our decentralized knowledge network IBI TH!NK.

In 1990, the NHS ‘internal market’ was introduced, turning parts of the NHS into providers of services selling to others – the purchasers. At the same time, hospitals became individual NHS Trusts –with individual financial and corporate governance and services, required to address the particular needs of their patients and local community.

Two years later, John Major’s administration introduced the Private Finance Initiative (PFI) through which social infrastructure was to be delivered by the private sector outside the government’s borrowing requirement. Funded by private sector equity and debt funding and paid for by the public sector ‘customer’ through monthly payments over the life of the project, the PFI providers’ obligations for maintenance and repair disincentivised the routine cost cutting in the public sector as a result of financial constraints, this resulted in a vast, increase in stock of sub-standard NHS facilities.

The first healthcare project to be commissioned and constructed under PFI was Darent Valley Hospital, designed by IBI (then Nightingale Associates) and opened in 2000. Although the election of Tony Blair’s first New Labour government in May 1997 was expected to sound the death knell for PFI, within two months the Health Secretary, Alan Milburn, stated that “when there is a limited amount of public-sector capital available, as there is, it’s PFI or bust”. Today there are 127 NHS PFI schemes, with all but those at Sandwell and Liverpool (as a result of the recent collapse of Carillion) complete, at a total value of £13bn. Amongst these are schemes at Darlington, King’s, Peterborough, Coventry, North Middlesex and West Middlesex undertaken by IBI (as Nightingale Associates).

The more than doubling of investment in healthcare by successive labour governments between 1997 and 2010 provided opportunities to develop concepts that improve the quality, efficiency and sustainability of the built environment.

During this period, IBI not only completed a series of major PFI projects such as those at Coventry and Peterborough, but also, via the national healthcare frameworks such as the UK’s first new build 100% single bed NHS hospital (Ysbyty Aneurin Bevan). Through the work of its teams, the practice also developed concepts such as ‘sense sensitive design’, ‘emotional mapping’, the ‘cruciform’ 4 bed bay, the ‘Barn’ operating theatre and the ‘BedPod’. These concepts focused on enhancing the patient environment, improving clinical outcomes and recovery times, increasing patient throughput and facilitating the sharing of clinical best practice. 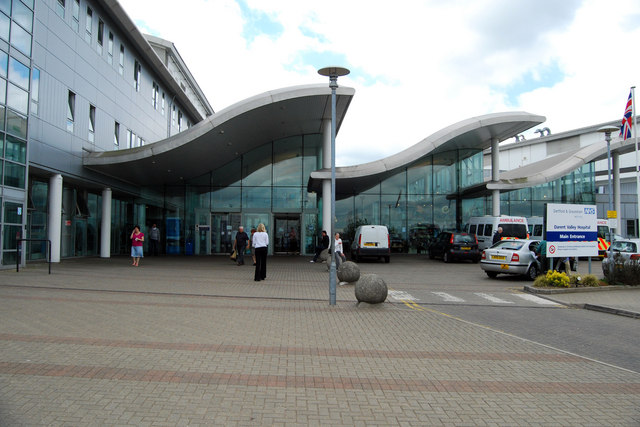 In 2000, in parallel with PFI, the Department of Health (DH – successor to DHSS) established the NHS ‘LIFT’ (‘Local Improvement Finance Trust’) programme as a means of delivering new models of care aimed at transforming primary and community care. 47 LIFT companies and two Express LIFT companies were established over four procurement phases. IBI has delivered more than 10% of these schemes, primarily across North West England, and is currently undertaking a further scheme at Barrow-in-Furness.

With projects commissioned before the global financial crash of 2008 completing, NHS spending growth fell from a peak of 8.6% in the years 2001-05 to just 0.7% between 2010-15. Capital allocations were transferred to support day to day spending, and the years since 2010 have been a period of austerity, marked by a significant reduction in NHS capital expenditure. This has resulted in a focus on efficiency savings (eg the application of ‘standard’ room types collaboratively developed on the ‘ProCure21+’ national healthcare framework), low cost and refurbishment projects, and schemes largely self-funded through release of surplus land (estimated in 2014 as enough to accommodate 300,000 new homes). The IBI designed £150m Chase Farm Hospital redevelopment, nearly half funded by the sale of part of the former hospital site, will be the only major acute facility to be completed in the NHS’s 70th year.

In 2014, with the recognition that the combined pressures of a growing and ageing population, the burden of managing chronic disease, medical and technological innovation and rising consumer expectations would result in a mismatch between patient resources and patient needs of nearly £30bn by 2020-21, the NHS published its “Five Year Forward View” setting out both a clear proposed direction and associated actions required to address the issues of demand, efficiency and funding in order to sustain a high quality, comprehensive service.

In addition to focussing on the need to promote healthy lifestyles to achieve wellbeing and disease prevention, the “Forward View” also sought to identify the steps by which existing healthcare barriers have traditionally been provided. Relationships identified include those between GPs and hospitals, between physical and mental health, and between health and social care. Those could be broken down, thereby addressing key issues such as ‘bed blocking’ which results from delays in transferring patients from NHS acute to local authority social care facilities. Additionally, it put forward proposals for how key elements of service such as emergency and urgent care services could be redesigned to better integrate A&E Departments, GP out-of-hours services, urgent care centres, the NHS helpline service and the ambulance service helping to alleviate increasingly severe ‘winter bed pressures’ across the NHS.

In highlighting the need for the population to take greater responsibility for their individual health, the “Forward View” served to vindicate the long held view of IBI and others that the physical and social characteristics of communities are key factors in promoting health. They also contribute to physical and mental health outcomes through perceptions of local area social connections, physical activity, environmental health, safety and security. IBI has subsequently addressed these issues in its ground-breaking work undertaken as part of the “NHS Healthy New Towns” study.

Building upon the recommendations of the “Forward View”, in 2016 the NHS published Lord Carter of Coles report “Operational productivity and performance in English NHS acute hospitals: Unwarranted variations” and in 2017, in acknowledgement that without significant investment in the NHS estate, it would remain unfit for purpose, continue to deteriorate and prevent delivery of the “Forward View”, Sir Robert Naylor’s report “NHS Property and Estates – Why the estate matters for patients”.

This lead to the creations of local ‘Sustainability and Transformation Plans’ (STPs) which are ‘place-based plans’ jointly developed by NHS organisations and Local Authorities for the future of integrated local health and care services. They address the need to develop robust capital plans that align with clinical strategies, maximise value for money and address backlog maintenance issues resulting from historical under-investment. Naylor estimated the NHS estate’s STP capital requirements at circa £10bn, backlog maintenance at £5bn (an increase of more than 9% since 2014-15 alone) and at £5bn to facilitate delivery of the “Forward View”. 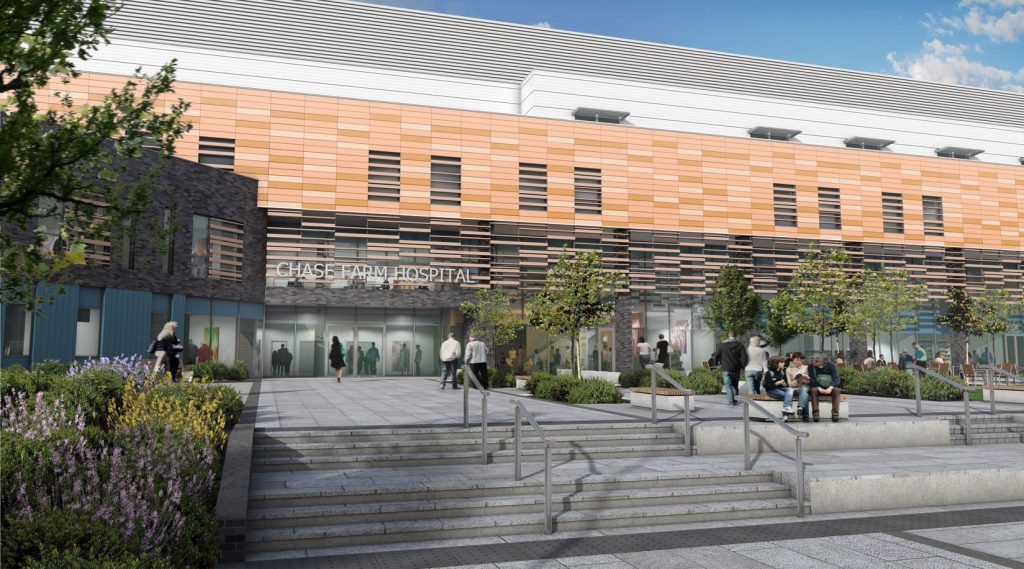 Beyond organisational changes aimed at supporting of national strategic planning and local delivery, Naylor’s recommendations included the provision of improved guidance on building standards in support of the “Forward View”. This draws upon lessons learned during the implementation of vanguard projects, on estates planning and on surplus land disposals – the latter reinforced by proposals in which locally generated disposal receipts are matched on a 1:2 basis by public funds. The redevelopment of Chase Farm Hospital, for which IBI is the architect, has been partly funded by the sale of redundant parts of the existing hospital site for a residential development of up to 500 new high-quality family homes and apartments. The project includes key worker accommodation set within a landscaped environment, and a new three-form entry primary school which will provide much needed school places for new and existing residents.

In the months and weeks leading up to the 70th anniversary of the establishment of the NHS, the UK government has made two significant announcements. The first announcement declared the allocation of £760m towards the STP’s capital funding needs – the equivalent of the cost of a major new hospital and which the government has undertaken to repeat on an annual basis. The second announcement shared the news of an additional £20.5bn of annual non-capital NHS funding by 2023, taking the service’s annual budget to £135bn.

John Knape is a qualified Architect with over 30 years of post-qualification experience and has been especially committed to the design of healthcare facilities and building types which fulfil social needs. His experience covers work in both the public and private sectors and he can draw upon a thorough knowledge of relevant design standards including Department of Health Building Notes and Technical Memoranda. John has experience of a wide range of procurement methods including traditional and two-stage tendering, design & build, partnering, management contracting and PFI and in his role as the practice’s Frameworks Director, has been instrumental in leading successful bid processes to secure IBI’s position as Primary Supply Chain Members on all three UK national healthcare Frameworks.

John has recently led teams on a number of projects in both the acute and primary care sectors, including the award winning development at Broadgreen Hospital, Liverpool. John is keen to pioneer innovative design solutions such as the “Barn Theatre” concept, but places great emphasis on excellent relationships with client and contractor as the key to a successful project.