Self-Driving Cars: All that Glitters is not Gold

**Cover image via Tech Radar
**Cover image via Tech Radar
There has been no shortage of articles highlighting the benefits of self-driving cars. While this technology presents opportunities to enhance our cities and urban regions, many of the articles that herald the arrival of autonomous vehicles (AVs) miss the larger picture, especially concerning how the introduction of this new technology pertains to urban issues, including...

There has been no shortage of articles highlighting the benefits of self-driving cars. While this technology presents opportunities to enhance our cities and urban regions, many of the articles that herald the arrival of autonomous vehicles (AVs) miss the larger picture, especially concerning how the introduction of this new technology pertains to urban issues, including parking, traffic, roads and urbanism.

There are certainly benefits derived from freeing up highly valuable developable land in our downtowns by removing or transforming parking structures, and the proposal to utilize mostly-vacant big box parking lots in the suburbs seems to be more efficient. In addition, the idea of riding ones AV to work, one alternative, sending it off to park itself in the suburbs and hailing it for the ride home seems appealing. However, following this scenario through to its logical conclusion: If every commute is handled by a driverless car as described, I can imagine roads full of cars on the way into the city, then full of cars on their way out of city to the suburban mall parking lots, then full of the same cars on their way into the city to pick up the commuter and finally, full of cars on their way back out of the city to take them home, effectively converting two commutes into four.

Even in this scenario, there are added efficiencies due to the ability of AV’s to be packed more densely onto the roadways, but this doesn’t negate the fact that each commuting vehicle could be effectively doubling the number of miles travelled, the fuel consumed, and the pollution produced, for every daily commute, more efficient vehicles and greener fuels notwithstanding. There’s no guarantee that demand for parking within our downtowns would disappear with AVs, either. People will still want their cars to be as close as possible, in part to give them a ‘jump’ on the rest of the commuter traffic or to be quickly available for spur of the moment trips, like unforeseen meetings and last minute errands. Until the car is seen by everyone as a ubiquitous, completely anonymous utility, this attitude and these pressures will not likely change.

Another proposed benefit of the AV is that, should the driver not be ready to use the car when it returns, it can simply ‘circle the block’ until he or she is ready. The unfortunate result of this is the potential that all these wandering empty vehicles will simply generate more traffic and consume more fuel. 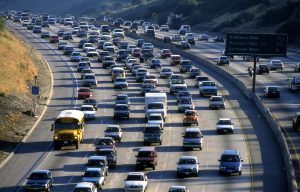 Imagine this four times per day, with two of those trips consisting mainly of empty vehicles!

Another proposed benefit of the coming AV revolution is that we will be able to squeeze more vehicles into each drive lane and narrow these lanes from a now-typical 11 – 12 feet (3.3 – 3.65 meters), to about 10 feet (3.0 meters) or even less, allowing for the addition of more lanes to some streets. This is also appealing with respect to the possibility of adding cycling lanes. Currently, excessively wide lanes are necessary to retain a shy distance for us notoriously sloppy human drivers. Proponents suggest that with precision driving ability and faster response times, AVs will be able to maneuver safely within a much narrower lane and follow more closely.

This would be good news once it actually became possible. However, there are serious hurdles to be overcome: As long as AVs retain the option to be piloted by a human, lane widths will have to remain as they are in order to maintain the shy distance for when the human driver takes over. As long as there are large delivery trucks, tractor-trailers, city buses, motorhomes, cars pulling camper trailers, and other wide vehicles on the road, lanes will need to remain wide simply to accommodate the physical dimension of these larger vehicles. All of this also assumes that AV makers and public authorities will overcome the reluctance of many to give up ‘driving’ and to relinquish control of their cars, trucks and SUVs. As we know, North Americans have a strong attachment to their vehicles and many will resist giving them up. Again, until all vehicles are AV, we can’t assume that we’ll see the benefits of narrower drive lanes. And given how the existing technology is so deeply integrated into our society and ingrained in our psyches, this could take a generation or two. 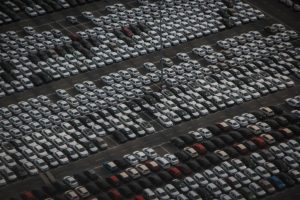 Finally, and most importantly, the AV does nothing to encourage people to get out of their cars and may actually dissuade them from using transit at all. The AV could actively undermine the concept of urban living and hence density, as people will be able to further justify suburban living, once the “commuting problem” and the “parking problem” are apparently ‘solved’… If people can safely sleep, or work, or even dine while commuting, then the 2 hour travel time they once dreaded may be much more tolerable, even acceptable. This equivalent of induced demand on steroids could further contribute to sprawling suburbs. This is contradictory to everything urbanists, mobility planners and many others have been working towards in an effort to create denser, walkable cities and communities. Before we become too enamored of this bright shiny technology, we need to step back and look at the broader implications.

In spite of everything I’ve presented here, I’m not suggesting that these issues are insoluble. If city-builders and decision-makers take the time to look more deeply at the potential negative as well as the promised positive impacts of AVs, we can craft policy and design guidelines that ensure AVs offer real solutions that promote good urbanism, while improving mobility options. There is little debate that AV technology is coming. The key question is whether it will improve our lives and cities.