How Copenhagen Convinced it’s Residents to Take the Plunge

Copenhagen’s water is some of the cleanest in the world—and not just for drinking, but swimming too. This wasn’t always the case though. Up until quite recently, contamination, waste, dead fish and algae all lingered in the inner city seas. Transforming the waterways to what they are today took much more than just cleaning up....

Copenhagen’s water is some of the cleanest in the world—and not just for drinking, but swimming too. This wasn’t always the case though. Up until quite recently, contamination, waste, dead fish and algae all lingered in the inner city seas. Transforming the waterways to what they are today took much more than just cleaning up. The city had to change their water narrative too.

Geographically, Copenhagen is wrapped by the Øresund Strait which feeds into a spinal harbour that splits the city in two. The harbour and its rib-like channels were previously used for transporting goods and establishing a strong industrial presence in the city. Oil spills and industrial waste contamination were a common expense for the waterways, not to mention the sewage overflow that spilled into the harbour after heavy rainfall.

It wasn’t until the 1980’s that Copenhagen started to integrate its waterways into part of its urban identity. The industrial port at the city’s south end slowed down, creating the opportunity for new residential and office spaces. As part of this transformation, the city began to put more emphasis on its waterfront public spaces, re-establishing aquatic life for people, and centering the harbour as its own living system. Under this new direction both the waterway and its connected narrative were becoming less murky. By 1992, the political goal of the south port transformation was to make it possible to bathe and fish in the new cultural centre.

In order to meet this goal, the City of Copenhagen needed to separate its sewer and rain water systems to prevent sewage leakages from spilling into the harbour. This effort cost the city over 30 million euros. Without separate systems, it would be only inevitable that the sewage system would overflow during heavy rainfalls, directly polluting the harbour. The amended system now includes overflow barriers to catch excess rainwater from overfilling the waste system, though this system may not prevent spillage entirely during heavy rainfall.

To protect residents from potentially unsafe waters, the city installed sensors and water-level gauges in the overflow basins that read the levels of sewage discharge. Once an overflow is registered, an automatic text is sent to the bathing water official where they can assess the sites at risk of sanitation issues. This information is then disseminated to the swimming basins as well as posted publicly online for people to check directly as far as four days in advanced. Since 1995, Copenhagen has reduced their harbour sewage spills by over 75%.

Copenhagen’s harbour revitalization is one of the most successful waterfront transformations in the world. Though this process has come at no small fee, the outcomes are invaluably embedded in the city’s cultural identity. Cities like Chicago and Paris have followed suit and have begun to clean up their own inner city waters for public use, though they still have a long way to go before being ready for swimming. Copenhagen is not necessarily in the clear with its current solution either. As climate change continues to instigate fierce and erratic weather, the city’s overflow basins are still at risk of polluting the harbours. 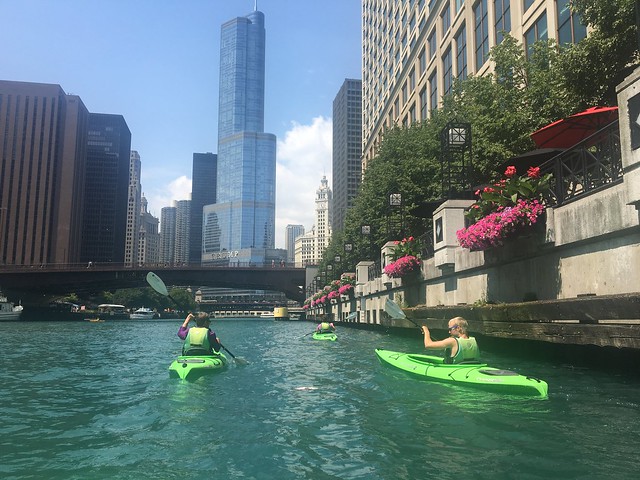 Kayaking down the Chicago River. Image by David Wilson via Flickr.