The Case for ‘Dispersed’ TODs

Calgary - Dispersed TOD
Calgary - Dispersed TOD
For the last three decades, Transit-Oriented Development (TOD) has been the response of transit and urban planners for walkable, sustainable and equitable communities within walking distance of transit. This approach benefits the residents with a more livable environment and access to high-quality transit, transit operators with increased ridership figures, and cities themselves, where increased transit...

For the last three decades, Transit-Oriented Development (TOD) has been the response of transit and urban planners for walkable, sustainable and equitable communities within walking distance of transit. This approach benefits the residents with a more livable environment and access to high-quality transit, transit operators with increased ridership figures, and cities themselves, where increased transit use means fewer cars on the road, cleaner air and less noise.

Urban development around transit has happened in three waves: First, without any planning at all, in the hope that TOD would happen on its own. Since this did not happen in many cases, phase two focused on planning ‘ideal’ TODs that would be perfect in terms of design, density and use. However, this strategy neglected existing vibrant neighbourhoods near transit stations, slated to be redeveloped the ‘right’ way. This flawed approach to local context gave rise to the third or current wave, one where new, denser development is carefully integrated in areas well-suited for redevelopment, leaving intact existing viable communities near the station. 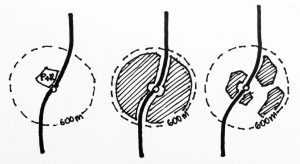 While the second approach works well for greenfield locations, and the third works well for disjointed neighborhoods, many station areas along transit corridors are located in existing low-density, single-family subdivisions. (For example, in the new Calgary LRT project I am involved in, about half of the 30 stations fall into this condition, so it’s far from a fringe condition.) For all the disadvantages they may bring from a location efficiency perspective, suburbs constitute viable communities, they are loved by many of their residents, they are completely built up – and they won’t be disappearing anytime soon. Furthermore, residents in these areas are often highly vocal about keeping the existing land uses and densities, and where, given the low-density environment, first-last mile initiatives to enhance bike and pedestrian access to the station may not be cost-effective. So is TOD hopeless in these locations?

I don’t think so. But it does requires a lateral-thinking approach, one that addresses the particularities of this condition. The key benefits of TOD can be included in these locations, without requiring full re-densification or new infrastructure and services. As a working title, let’s call them “Dispersed TODs.” It could become the fourth generation of TODs, one that coexists with the second and third waves mentioned before.

What is a Dispersed TOD? In essence, it is an existing residential suburb with a small mixed-use service core around a station, where first-last mile access is provided by new transit-on-demand technologies. Imagine a compact, walkable area of a block or two around the station, where you could grab some groceries on the way home, pick up your kid from daycare or get a package that’s waiting for you. Imagine using an app to reserve a shared Uber-like service that will pick you up from the platform at a time of your choosing and take you to your doorstep with the price included in your transit ticket.

While this concept may provoke criticism from contemporary urbanism circles, it is a viable proposal for most suburban locations. For one, there is no shortage of failing commercial strips in North America, the place where new rapid transit lines would be likely to run. Taking one or two blocks of this development to provide a thriving commercial core around the station would not be difficult to achieve. There are also many park-and-ride lots that could be transformed for higher use, once transit-on-demand takes hold. Such a transformation is not difficult to imagine, particularly because it would keep all of the single-family areas intact, while adding a small, walkable component that injects vitality into a failing commercial strip. User surveys have consistently shown that walkable areas are also favored by suburbanites – if they don’t impact on their housing choices.

Which brings us to the need for station access. In TODs, first-last-mile access is traditionally provided by safe, high-quality pedestrian and bike routes, but this has diminishing returns in low-density suburbia: too much investment to reach only a small number of potential users. Other 20th century alternatives are either counter to the TOD ideal of location efficiency (park-and-ride) or inefficient in operation (feeder buses).

Luckily, the advent of new mobility technologies, such as Bridj, Split and UberPool, allow us to provide timely, cost-efficient, and user-centric feeder services. In suburban Toronto, a pilot project by Metrolinx, the regional transportation authority, and RideCo, a new startup, has shown that you can provide financially viable, high-quality feeder services to GO rail stations in low-density areas. The benefits of these services include safer and convenient access to transit, increased ridership, and savings in park-and-ride facilities and feeder bus operation.

Dispersed TODs may be criticized as “window dressing” that does not address the significant social, fiscal and environmental costs of suburbia, but I ask: Aren’t these suburbs already there? Shouldn’t we connect them in a workable way to the benefit of transit? Would this not facilitate the transition of suburbs towards transit-readiness? Isn’t this the way to scale up the TOD concepts to what are still mainstream home choices?