The City of Today: Circle Back to the Past?

When I look at how cities have changed over the millennia, sometimes I get the impression that, in reality, they haven’t evolved much at all. For all of the physical differences between the insula and the detached home, the agora and shopping mall, the amphitheater and the Superdome, they all respond to key human activities...

When I look at how cities have changed over the millennia, sometimes I get the impression that, in reality, they haven’t evolved much at all. For all of the physical differences between the insula and the detached home, the agora and shopping mall, the amphitheater and the Superdome, they all respond to key human activities in urban areas, or ‘live-work-play,’ as we like to say today.

Yet, on the other hand, there is no denying that cities around the world have undergone momentous change, especially in the last 300 years, starting with the first industrial revolution. The changes brought about by steam, electricity, and oil-based technologies enabled cities to become the engines of economic growth and – with a fair share of growing pains and social strains – a way to increase well-being and quality of life.

Some argue that a ‘third industrial revolution’ is in the works, one that is based on, on knowledge rather than manufacturing, on virtual connections rather than physical communication, and on sharing rather than owning. Just think of all the hype about “Smart Cities,” “Internet-of-Things,” and “Big Data” and how they will change the world we live in.

However, I am unsure whether these technology-centric approaches are well-suited to tell us how cities will be evolving, because, in the end, technology is only an enabler, a tool, for transformation; the real value is in understanding where this transformation is going, or rather, how it will change the way citizens perceive, use, and engage with the physical environment around them.

In a 2025 outlook on infrastructure spending, PricewaterhouseCoopers (PwC) determined that as cities evolve, more (and more elaborate and expensive) infrastructure is needed (see diagram below). Cities that are in survival mode require minimal infrastructure to meet basic human needs; and as they progress from basic to advanced and finally to what PwC calls ‘quality of life’ cities, their infrastructure becomes a catalyst for economic development and social well-being. Importantly, PwC’s visual diagram shows, intentionally or not, how the different infrastructures become increasingly overlapped, which is to me the key insight of the chart: as a city becomes more complex, the pieces within it interact (or will need to interact) more and more with each other. 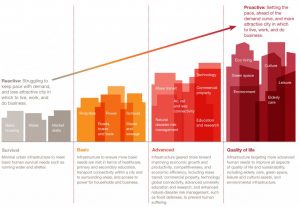 The Evolution of Cities, created by PricewaterhouseCoopers. Click here for larger image.

In other words, the diagram portrays a city that functions most effectively when its elements are holistically integrated rather than in individual and highly specialized silos. This is not a new idea – it was already explored in the 1960s by Christopher Alexander in his article “A City is not a Tree,” which contended that cities have traditionally been highly complex entities that work on the basis of interrelated networks (think of mixed use traditional neighborhoods), rather than simple and clean hierarchical structures (think of single-use districts and Euclidean zoning).

The notion of a city understood as a whole was the norm in the preindustrial world: an intricate (others would say: messy) ecosystem, one not made necessary by complexity and technology, but rather imposed by proximity and human nature. Are we coming full circle now, when we envision the city of the future as an interconnected, holistic whole?

If this is in fact happening, it brings up interesting parallels with the so called “Gutenberg Parenthesis,” namely that the 400-year period between the invention of print and the advent of the internet is just an interlude in the 7,000-year old history of oral culture. The only difference between medieval and digital culture being that we’ve added technology, which is a facilitator and an amplifier of this oral culture at the global scale.

If we assume, for a moment, that the industrial revolution didn’t structurally transform the city but only caused a brief hiatus in how we interact with it, evolving technology (Big Data, Smart Cities, Internet-of-Things) could be the enablers – but not the guarantors – of an old-and-new citizen centered urban future. This is a future that, rather counterintuitively, could look more like ancient Rome than modernistic Brasilia.