The Welcoming City: A Design Experiment in Mobile Humanitarian Aid

Following the closure of the infamous Calais Jungle in 2016 where it is estimated that over 10,000 migrant refugees were residing in the hope of crossing the English Channel to the U.K., French police now routinely remove upwards of 1,000 refugees a month from the roughly 30,000 people “sleeping rough” on the streets of Paris....

Following the closure of the infamous Calais Jungle in 2016 where it is estimated that over 10,000 migrant refugees were residing in the hope of crossing the English Channel to the U.K., French police now routinely remove upwards of 1,000 refugees a month from the roughly 30,000 people “sleeping rough” on the streets of Paris. Like the homeless in American cities, migrant populations and homeless encampments are urban typologies that continues to confound planners and politicians alike. Although often called a “social” or “political” problem that designers have no agency to address, the common typologies of homeless and refugee encampments do bear similarities that can serve as instigators to find new solutions. 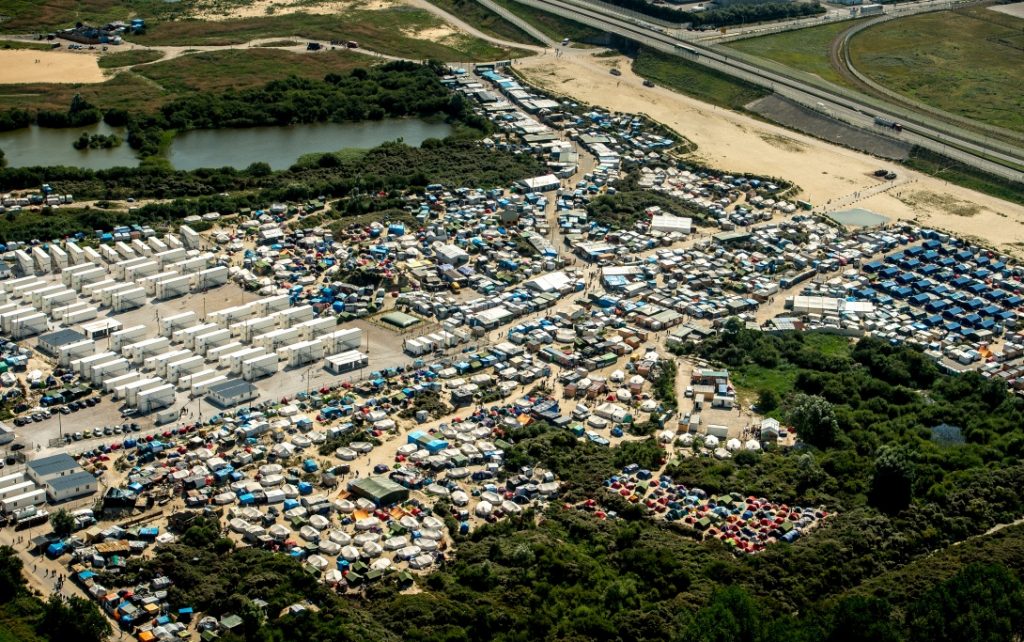 To address this problem in a systemic way, I proposed a Study Abroad studio to architecture students that would combine the social impact of architectural intervention in the homeless crisis with the aim of overseas travel to expand students’ understanding of other cultures by asking the question:

What happens when “Study Abroad” becomes an opportunity for a social innovation studio in architectural education?

Over 325,000 students study abroad every year in the U.S. They spend on average $10,000 to do so, representing a collective investment of $3.25 billion, about half of which is used for tuition at institutions of higher education. That leaves about $1.75 billion that students are spending beyond tuition, 50% of which is spent travelling to Europe. Diverting some of that revenue towards humanitarian aid in the form of volunteer hours allowed students to work with NGO’s in France serving migrant refugees as an entry point into a design thinking cycle, as an empathy-building exercise. It was determined from the outset that a “design problem” would be developed, not assigned, as part of an iterative process. By the end of the semester, students’ had developed a “prototype” for a mobile city, an unexpected twist in a course pedagogy that more often than not yields prototypes for individual emergency shelters.

Before we left Los Angeles, students were asked the following question:

When is it okay for large and seasonal movements of people to occupy a host territory?

Their surprising answer?  Music festivals, another “mobile encampment” typology. From fairs to conventions to the Olympics, cities often welcome transitory movements of visitors, accepting inconveniences such as strain on local infrastructure in exchange for economic benefit, a carefully controlled time frame and a well-defined geographic territory.  Precedent research focused on all manner of mobile, urban typologies, a rich history of which exists in the architectural imagination.  The 65 million people wandering the planet in search of safe and prosperous communities are not burdens on permanent human settlements:  rather, they are sources of new knowledge, new skills, new networks and new economies.  And, as the UN continues to explore blockchain technology, it succeeded last year in transferring $1.4 million in Ethereum food vouchers to 10,500 Syrian refugees. Refugees, in other words, come bearing gifts, just like the rest of us. 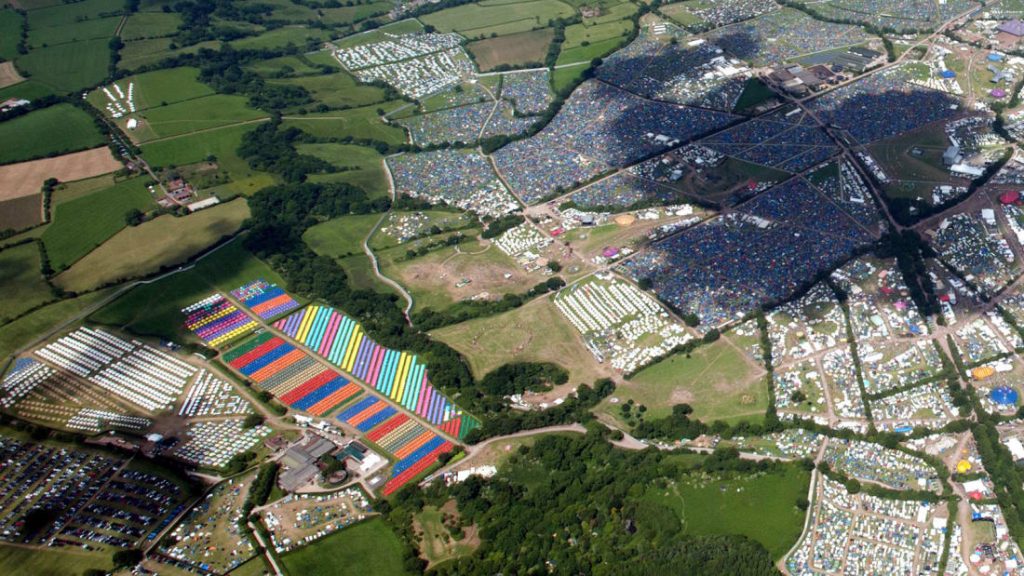 175,000 music fans camping at the Glastonbury Festival, southwest England, June, 2015, at the peak of the refugee crisis in Calais. It lasts one week, and then it’s back to dairy farming for the next 51 weeks. Image Credit: CNN

Once the notion of designing a mobile humanitarian event took hold, we signed up to work with Calais Volunteers, a loose partnership between 4 aid organizations in France:  Utopia 56, Help Refugees UK, Refugee Community Kitchen and Auberge des Migrants.  The location for the volunteer phase and ethnographic data gathering was the Calais Warehouse, a building leased by Auberge des Migrants where donations of food, clothing and medical supplies from throughout Europe are sorted, packed and distributed to migrants throughout Northern France.  We quickly realized that our ethnographic subjects would include the humanitarian aid workers as well as the refugees.  We observed that many of the volunteers were young, fearless and slightly untethered from home and family themselves, leading somewhat nomadic lives and, oddly, volunteering at music festivals in their spare time.  In fact, Utopia 56 was founded by a music festival logistics manager!

Inevitably, the “refugee camp,” as currently conceived, creates a counterproductive cycle in which the host community’s wish to see the camp dissolve in an unspecified “timely” manner conflicts with sturdier,  permanent settlements. The more urban an encampment becomes, the more it is a failure vis-à-vis the host community, as refugees do not move on and temporary settlements become permanent slums.  To achieve this goal and others, students proposed an architectural program for a temporary and mobile humanitarian aid event based on the following principles derived from their ethnographic research: 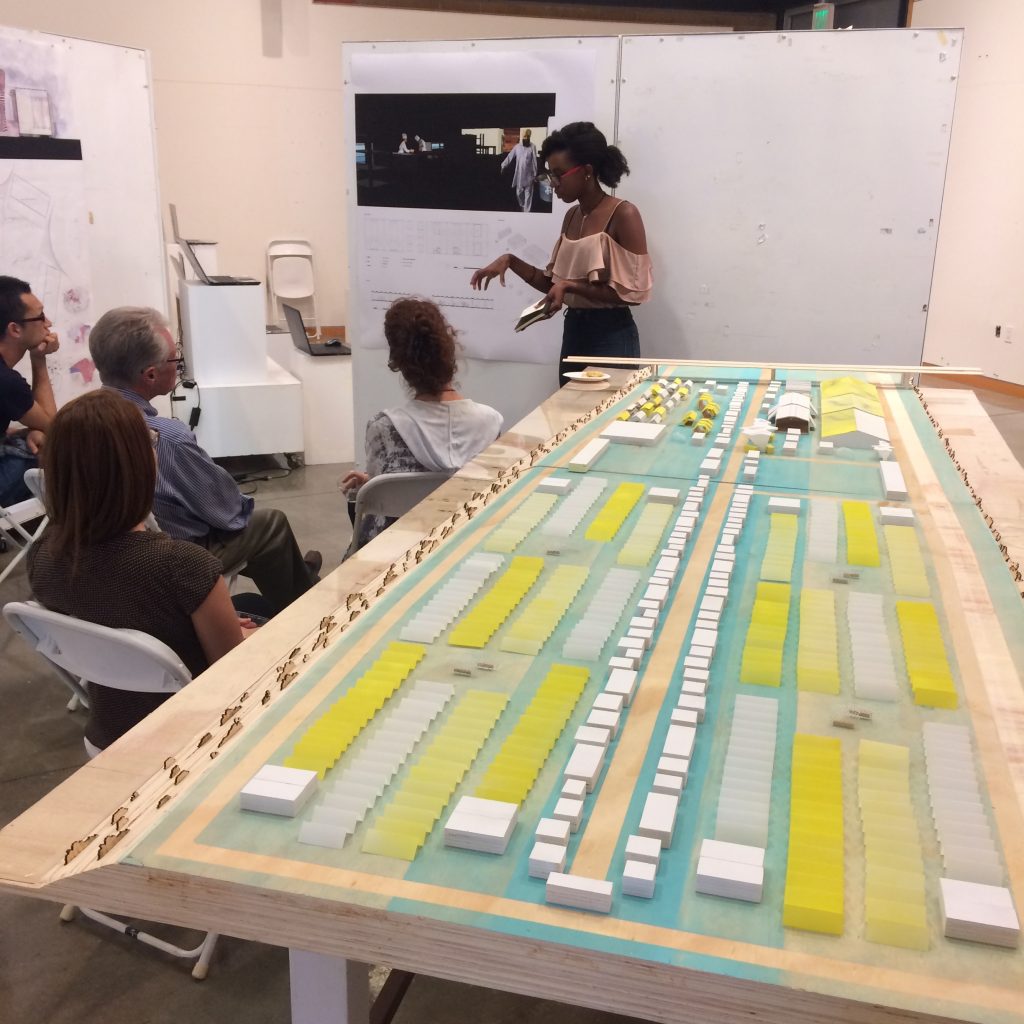 Students presenting their final work from the studio. Image by author.

The event plan created by the students included an Esplanade to house 100+ NGO stands and kiosks, 1,300 Tent sites with Tea and Prayer areas and a Recreation Zone. Individual mobile building projects included a Wellness and Hygiene Center, a Sortation Warehouse, a Community Bakery, Vulnerable Persons Shelter, Children’s Learning Center and a Technology Incubator.

What these architecture students learned from the semester was the integration of new data gathering tools and techniques in what is classically considered the “programming” phase of architectural design, but is used more broadly in other design disciplines (notably U/X design) to encompass the empathy and ideation phases of a design thinking methodology.  They also learned how to design an event plan and mobile structures.