Urban Burbs, the Next Millennial Magnets?

Cities or suburbs? Car-free or poor? The convenience of online commerce or brick and mortar authenticity? No shortage of ink has been spilled speculating about the preferences and motivations of people born between 1980 and the early 2000s, often called “millennials”. Despite this intense focus, conclusive outcomes have been few and far between. Having recently eclipsed...

Cities or suburbs? Car-free or poor? The convenience of online commerce or brick and mortar authenticity? No shortage of ink has been spilled speculating about the preferences and motivations of people born between 1980 and the early 2000s, often called “millennials”. Despite this intense focus, conclusive outcomes have been few and far between. Having recently eclipsed baby boomers as the largest living and working generation in the US and Canada, at a time when mobile digital technology becomes the most significant technological shift since the automobile, the choices they make will be central to shaping 21st century cities. So what do we know about millennial preferences? First, and foremost, it’s not a cohesive group! According to the US Census, it’s, in fact, the most diverse. Size and diversity aside, after extensive research and number crunching, a nuanced perspective is beginning to emerge, with important indications about the environments and lifestyles that millennials will desire as they settle down.

Contrary to many suggestions, millennials, myself included, aren’t moving en masse to expensive big city downtowns. But they aren’t rushing to the suburbs either. Instead, to fulfill their desire for urbanity, city neighbourhoods outside the downtown core are the primary destination. To live affordably near work and/or school, with plenty of spaces and places to meet friends and where car ownership is an option, not a necessity, are key selling points for this generation.

Looking forward, some suggest that, as with so many other aspects of their adult lives, millennials are simply holding off on moving to the suburbs. Traditional suburbs will suffice for some, but for many, a move outward will need to be accompanied by similar extensions of urbanity. What might that look like?

Just as neighbourhood, housing and mobility preferences in post-war suburbs conspired to make the car king, millennial preferences could lead to car-free, or at least car-optional suburbs. Walkable streets with access to quality transit, along with shops to satisfy daily needs and a few places to get a coffee or meal within walking distance could be the foundation for the millennial suburb, or “urban burb”. In terms of housing, space does not trump all else, but it is a key reason that people choose to move beyond the confines of inner-city dwellings, particularly as they start families. With this in mind, a private or neighbour-shared yard or terrace is appealing, but shouldn’t compromise the walkability or affordability of the neighbourhood. In addition to walkable streets and accessible transit, infrastructure that makes bicycling a realistic and comfortable option, along with readily available car-share options will ensure that the mobility preferences of this generation, and their coming children, are well served. 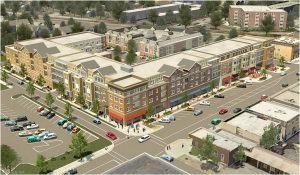 So what does this mean for cities and the range of actors working to shape them today? Without trying to predict the effects of the many disruptive technologies on the horizon, a number opportunities can be identified. Walkable neighbourhoods are more conducive to local shops, neighbourhood daycare and even microbreweries. While walking, biking and transit can make car ownership unnecessary, there are still trips that are best suited for cars, increasingly so with children. In those cases, car share is a much more affordable option – and another growth market. Finally, planning, architecture and development firms with a commitment to good city-making have the prospect of extending their work beyond the inner-city into the relatively untapped swaths of suburban sprawl. Economic prosperity, enhanced social cohesion and a big step towards real environmental sustainability. The urban burb presents an opportunity to apply many of the lessons city-makers and city governments have learned since embarking on a post-1950 campaign of dispersion – creating healthier, happier and more lucrative places as they do.