Vancouver Architecture: Growing Into Its Own

It takes time for a city to mature and properly grow into its own being. The same goes for architecture: time is needed for the city to properly react to its environment and to then hone its own identity. And, as time passes, ever-evolving designs and ideologies, coupled with the birth of new building technologies, mature the...

It takes time for a city to mature and properly grow into its own being. The same goes for architecture: time is needed for the city to properly react to its environment and to then hone its own identity. And, as time passes, ever-evolving designs and ideologies, coupled with the birth of new building technologies, mature the architecture to a more comprehensively defined style.

The City of Vancouver is a great example of a city that has grown through its adolescence, searching for its own architectural identity, but today, has truly come into its own.

The city was born out of the Township of Granville – a young settlement located on the heavily forested land across the harbour from where the North Shore Mountains meet the sea. From the get-go, Granville was as multicultural as Vancouver is today: home to the local Musqueam, Squamish, and Tsleil-Waututh First Nations, who had already called the area home for thousands of years, Canadians from the east, Americans from the south, as well as Europeans and Asians from abroad. When Canadian Pacific Railway decided Granville would be home to the proposed terminus station for the country’s rail line, the town exploded. In 1886, the Town of Granville was incorporated and became the City of Vancouver.

For the city’s first half century, its architecture followed the late 19th century styles of Europe, eastern Canada, and the United States which included Victorian, Edwardian, and the Arts and Crafts styles. Few buildings from the 1800s remain. However; some notable buildings built around the turn of the century include the British Columbia Courthouse, currently home to the Vancouver Art Gallery, (1906), the Dominion Building (1907), and the Hotel Europe (1909). 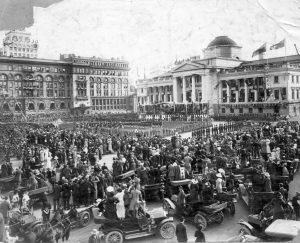 Ceremony on the courthouse grounds for the Duke of Connaught, 1912. (City of Vancouver Archives, AM54-S4-: Duke of Conn P25) 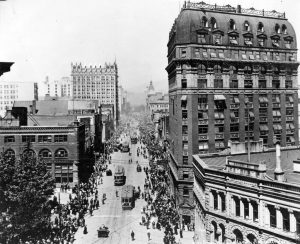 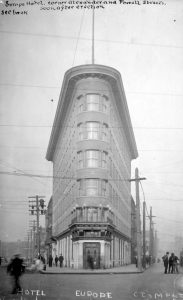 Following World War I, post-war ideals gave a new hope to the direction societies across Europe and North America were heading. This was reflected in the architecture of the day. Art Deco and Morderne flourished during the 1920s and 30s in Vancouver, peaking with the designs of the Marine Building (1930), the Burrard Street Bridge (1932), and later by Vancouver City Hall (1936). 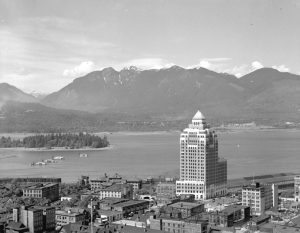 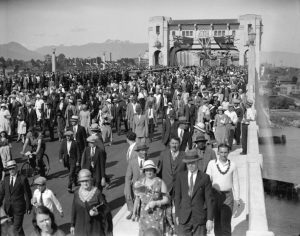 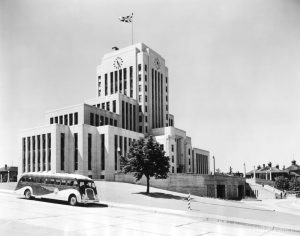 Following World War II, West Coast Modernism began to take form in the domestic architecture of the area. Vancouver’s take on the Modern movement happening internationally, West Coast Modernism endeavoured to blend outdoors and indoors through large pieces of glass – maximizing natural light indoors while also providing expansive views to the building’s context. Other key features of these homes included the use of local wood, both indoors and out, as well as large overhangs for weather protection from both the summer sun and the lengthy fall, winter, and spring precipitation.

From its domestic beginnings, West Coast Modernism evolved into the design of Vancouver’s towers of glass during the mid-20th century. Stunning views of the city’s surrounding mountains and bodies of water meant it was imperative for the skins of these towers to be glass. The emphasis on looking out was even evidenced in local Brutalist architecture. Strong examples of architecture from this time include the BC Electric Building (1957), Arthur Erickson’s MacMillan Bloedel Building (1968), and the Guinness Tower (1969). 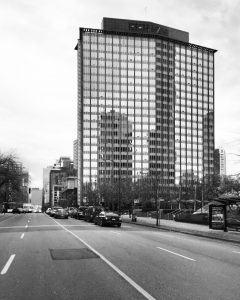 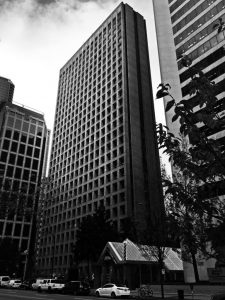 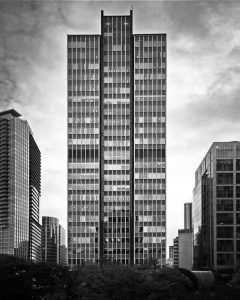 The beginning of the 21st century has brought on the next chapter in Vancouver honing in on its architectural style. Continuing to glaze full facades, Vancouver’s towers are being built tall and skinny to allow neighbouring towers to view through their site as well as minimize their shadows. They are built atop of wide, mixed-use podiums which are designed to animate the public realm at the building’s base. This style of podiums with point towers has been coined as Vancouverism. Some recent examples that embody Vancouverism are The Residences at the Hotel Georgia, West Pender Place, and The Mark. 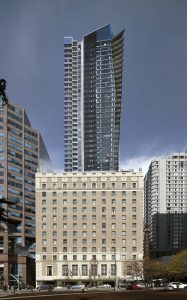 The Private Residences at Hotel Georgia 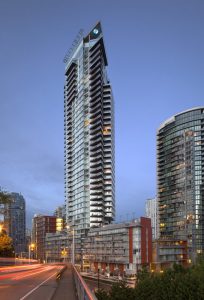 Today, a few key elements are influencing the growth of Vancouver’s architectural style: internationally-renowned architects are collaborating with local architects on landmark projects; the City pushing to become the Greenest City by 2020; and the City’s recently appointed a new Director of Planning, Urban Design, and Sustainability: Gil Kelley. Building off of 120 years of architectural evolution, the city of glass is threatening to become as inspiring as its surroundings.