Where Cities are Going, Next

In a recent post, I argued that the increasing complexity of developed cities necessitates coordination between different urban infrastructures to ensure operational efficiencies and produce social well-being. I also mentioned that new technologies – read: Big Data, Internet-of-Things, Smart City Systems – are not the centre of the ‘city of tomorrow,’ but merely its enablers....

In a recent post, I argued that the increasing complexity of developed cities necessitates coordination between different urban infrastructures to ensure operational efficiencies and produce social well-being. I also mentioned that new technologies – read: Big Data, Internet-of-Things, Smart City Systems – are not the centre of the ‘city of tomorrow,’ but merely its enablers. But where are cities going with this?

A good way to frame an answer to this question is not through the lens of new technologies, but through understanding where cities have been in the past, where they are now and, given this track record, where they are likely to be in the future: Hindsight and insight can lead to foresight.

To illustrate this process, I created the Evolution of Cities Roadmap that is depicted below. It includes the central ideas or ‘themes’ that have dominated post-industrial urban discourse since 1970 and potentially will do so for the next couple of decades. It shows, on a simplified timeline, how the basic components of cities – infrastructure, buildings, technology, and citizens – increasingly begin to overlap, interact, and build upon each other. 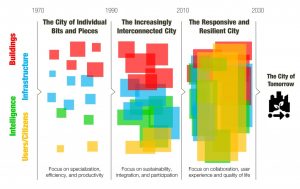 The Evolution of Cities Roadmap. Click here for larger image.

The first phase, called ‘The City of Bits and Pieces’ continues the tradition of specialization, a hallmark of the 20th century economy. It focuses on individual components (bridges, airports, hospitals, schools, traffic signals) and includes citizen participation primarily through elected representatives and public meetings. The emphasis is in providing products and services with as much efficiency as possible, usually through silo-ed institutions, meeting basic needs and improving productivity.

The second phase, ‘The Increasingly Interconnected City,’ roughly corresponding to the city of today, begins to recognize that its pieces are interconnected, part of a complex whole. It focuses on bridging the barriers between silos by harnessing the power of emerging technologies, such as workplace collaboration platforms and mobile-based end user apps. Public participation and input increasingly occurs through online outreach platforms and crowdsourced data that provides information for a more efficient and personalized provision of services.

The foundational changes in how the city is perceived in the first versus the second phase gives a powerful clue about how the third phase could look like. I’ve named it ‘The Responsive and Resilient City,’ because here the ties between end users and public and private service providers are bound to be further strengthened. The emphasis will shift from overly centralized organizations statistically predicting user needs in aggregate (think of public transit providers) to users themselves collaborating in real time to meet specific needs in a particular moment in time (think of mobile-phone-based car-sharing), increasing adaptability and resilience.

These changes go beyond cities. They are reflections on how the world is rapidly changing around us, based on a power shift towards the individual, enabled by the Internet age. What this user-centric, network-based new world means to cities is that they are compelled, by the expectations of its citizens, to become more responsive in real time to the needs of the individual, or, as John Hagel would put it, more “pull than push.” The New Urban Mechanics program, which started in Boston with an app to report graffiti and potholes, is a good example of this.

While still many issues, notably data privacy and security and the inequities of a rising digital divide, need to be solved, as many experts have pointed out, this evolving city notion has the potential to substantially alter the way people experience and interact with the physical city, with each other, and with service providers. Will it happen to the benefit of citizens? The jury is still out on this – but it certainly has the potential to do so