Protesters calling themselves “the yellow vests” have been marching in the streets of France since November. Without any formal leaders or planning, over 300,000 people have joined demonstrations. The mass demonstrations have since grown into a broad critique of the French government. Some clashes with authorities have turned violent and accidents near blockades have resulted in fatalities. But how and why did it all begin? What can we learn going forward?

The spark which started a wild fire of civil discontent was the levying of fuel taxes. Since 2014, local carbon taxes had increased each year as part of a strategic effort to curb the use of fossil fuels. The ongoing tax increases were meant to change people’s behavior and deter them from driving, thus curbing fossil fuel use. 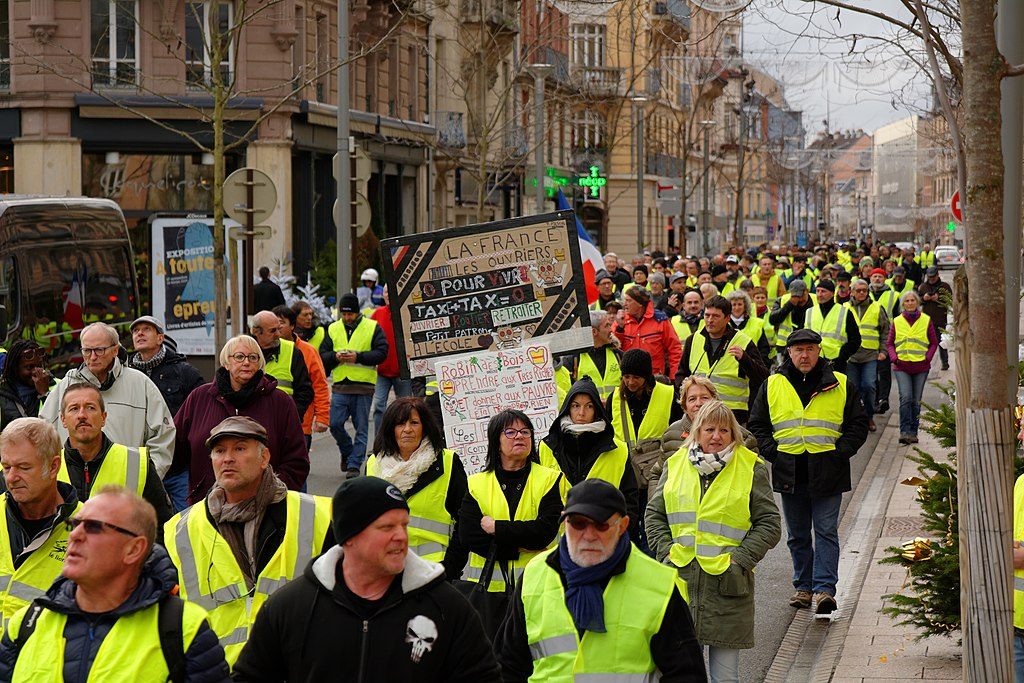 A yellow vest demonstration in Belfort on 1 December, 2018. Image by Thomas Bresson.

What legislators did not anticipate was the anger from people in rural areas, who are most dependent on their cars and disproportionately affected by the levies. These rural areas, where people’s lives were most affected by the fuel increases, are where the first wave of yellow vests generally lived. The yellow vests argued that if petrol becomes unaffordable, they would not be able to meet their basic travel needs which include accessing grocery markets, workplaces and schools. They felt the tax was unfair and that it overburdened their rising cost of living.

The French government’s decision to cut the speed limit on country roads by just 10km/h was reported as a major factor in the rise of the yellow vests protest movement. Early yellow vest demonstrations confirmed discontent through widespread vandalism of traffic enforcement equipment. Over 6,000 cases of vandalism to speed radar equipment were reported in 2018.

In France, all motor vehicles are required to carry a yellow vest in their glove compartment for use in emergency situations. As individual upset against taxes and tickets catalyzed into public demonstrations, the high-visibility emergency vests were an ideal symbol for the groups of angry motorists. Disparate communities felt a sense of solidarity in the movement – connected by the belief that their government was taxing and penalizing them unfairly.

Transportation Planners use the term “automobile dependency” to describe when driving is unavoidable. Automobile dependency happens when infrastructure and land use patterns prioritize driving over walking, cycling or transit. Automobile dependency becomes most pronounced where roads and land use patterns make driving feel like the only practical option. When places like grocery markets, schools, workplaces or medical facilities are over 10km away from home, it’s much more challenging to ask people to change their driving habits. Especially when alternative transportation options are not available.

Simply put: the fuel taxes were intended to encourage less driving and the speeding tickets were meant to encourage traffic safely. But in communities where the infrastructure was designed to encourage driving, frustration at the prospect of behavior change crossed over into anger. Instead of changing their travel behaviors, the common cause of resenting the taxes and tickets became a flash point for marches, vandalism and road blockades.

The lesson here is that transportation and land use policies as well as infrastructure investments must support a variety of transportation options. In rural communities, ride-sharing programs and micro-transit schemes could be promoted to provide transportation alternatives. At the land use scale, future policies must ensure that destinations are not too spread out. Regular investments in infrastructure to ensure walking, cycling and transit are safe and pleasant transportation options are needed. All of this should be led by educational campaigns that promote effective trip planning and telecommuting are needed for a positive culture shift.

The difficulty with sustainable change is that it takes time to build infrastructure and shift settlement patterns. If a jurisdiction enacts land use policies to help contain sprawl it may be a generation before the effects of these policies are felt. In contrast, the impact of taxation policies are felt much faster- usually quicker than infrastructure can be built. Any fuel or carbon tax legislation that gets passed may give taxation agencies the authority to collect money immediately.

Given the threats of climate change, a culture shift is required to curb auto-dependency. More rigorous land use policies are needed to define urban boundaries and to encourage people to live closer to employment and commercial centers. Urban tax regimes may be designed to incentivize infill construction and mixed use communities. Similarly, bans on residential building projects in forest or farm land can curtail sprawl. Ride sharing and micro-transit schemes may also help support people who live and work in rural areas. These programs must all be applied in tandem.

Best practices to achieve communities and transportation networks that are friendly for walking and cycling are known, but inconsistently realized. The yellow vest movement offers valuable insight into the backlash from imposing anti-driving taxes on auto-dependant communities. Climate change presents a serious problem, but when governments are seeking to achieve behaviour change, taxes are only one policy instrument that can be used to address the issue. Financial disincentives alone are not enough, we must also build the new travel networks that people need to get around.

Christina Bouchard provides technical consulting and project management services to public transportation agencies for the planning, design and implementation of infrastructure. She holds a Masters degree in Public Administration from Dalhousie University and is currently a PhD candidate at the University of Ottawa, where she is exploring best practices in infrastructure delivery. Christina’s interest in government structures, processes and performance management follow ten years experience working in the public sector.