IBI Group led renovations and new build for multiple key locations across Canada, including flagship stores in Calgary, Vancouver and Mississauga, and the ongoing renovations to ensure each store remains at the leading edge of retail design.

Various Cities, ON, AB, BC

In Vancouver, IBI Group was hired as Architect-of-Record for the relocation and expansion of Holt Renfrew’s 180,000 square foot, 3.5 floor retail environment in the downtown Pacific Centre Mall. The updated space features exterior walls wrapped in custom pillowed glass, emboldening the streetscape and introducing natural light throughout the store. Major departments are located at the top and bottom of the escalators connecting the three main floors, highlighted by a chic central atrium. The renovated and expanded store features a full café, new shoe hall, beauty hall, men’s wear department as well as enhanced personal shopping suites.

The construction of a 100,000 square foot Holt Renfrew store at Square One Shopping Centre was completed in July 2016 and was part of the south extension to the mall. The store’s main level consists of various scales and qualities of spaces, the highlight being a grand double height Leathergoods Hall with a coffered ceiling. The Mezzanine level houses a private personal shopping area and space for a future Holt Renfrew branded restaurant. The angular edges of the Mezzanine are pulled away from the exterior curtainwall, creating dynamic and bright double and triple height spaces. As the Architect of Record, IBI was responsible for the construction documents and contract administration of the construction of the core and shell, as well as the interior fit-out, both of which were designed by Janson Goldstein of New York.

In Toronto, the IBI design team was tasked with renovating Holt Renfrew’s flagship store along the upscale Bloor St. shopping district. An umbrella concept was designed and customized for individual departments, eventually guiding the creation of a uniquely branded boutique café – Holt’s Café. The fully operational restaurant and bar is located inside the flagship store, offering fine dining, gourmet bites and cocktails in a chic, elongated dining space.

In Calgary, we collaborated again with Janson Goldstein to create Holt Renfrew’s new home in a former 160,000 square foot Sears department store. The design, completed in 2008, highlights its elevated walkway arcade, opening up entrances and vistas into the store, and the addition of prominent new storefront window displays. A new, four-level atrium is flooded with natural light, and outside, three corner lanterns light up the streetscape to create a dramatic night time glow. 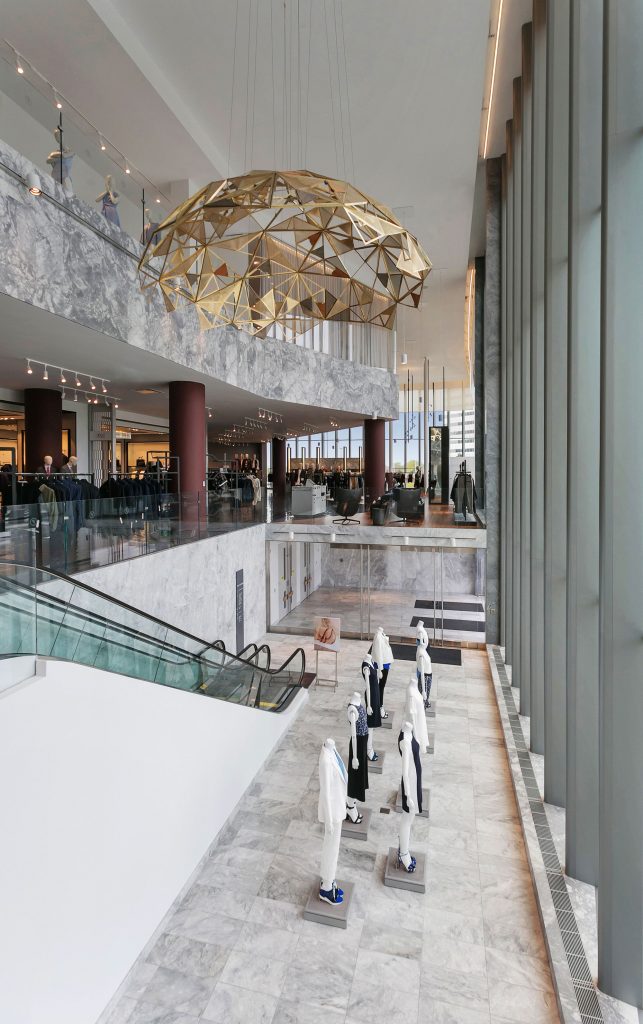