Let the Sunshine in: Why Blocking Out the Sun is Damaging our Health

As we were about to enter the season of summer 2019 the hottest of the four temperate seasons- “New Scientist” issued two magazine editions with leading front-page anchor articles entitled, “Let the sun shine in” – Why blocking out the sun is damaging your health and “Light up your life” – How getting more day...

As we were about to enter the season of summer 2019 the hottest of the four temperate seasons- “New Scientist” issued two magazine editions with leading front-page anchor articles entitled, “Let the sun shine in” – Why blocking out the sun is damaging your health and “Light up your life” – How getting more day light can transform your health. Little did we know that the weather stations would monitor the most extreme weather ever recorded in the United Kingdom. Both articles were authored by award winning journalist, Linda Geddes, whose books “Chasing the Sun” and “The New Science of Sunlight and how it shapes our bodies and minds” is a fascinating look at how our relationship with the sun continues to shape our bodies, attitudes and society. In essence, the New Scientist articles investigated and informed the reader about the conflict between applying sunscreen to prevent skin cancer, and sunlight deprivation doing more harm to health than good. Much supporting and compelling evidence was investigated in both articles. 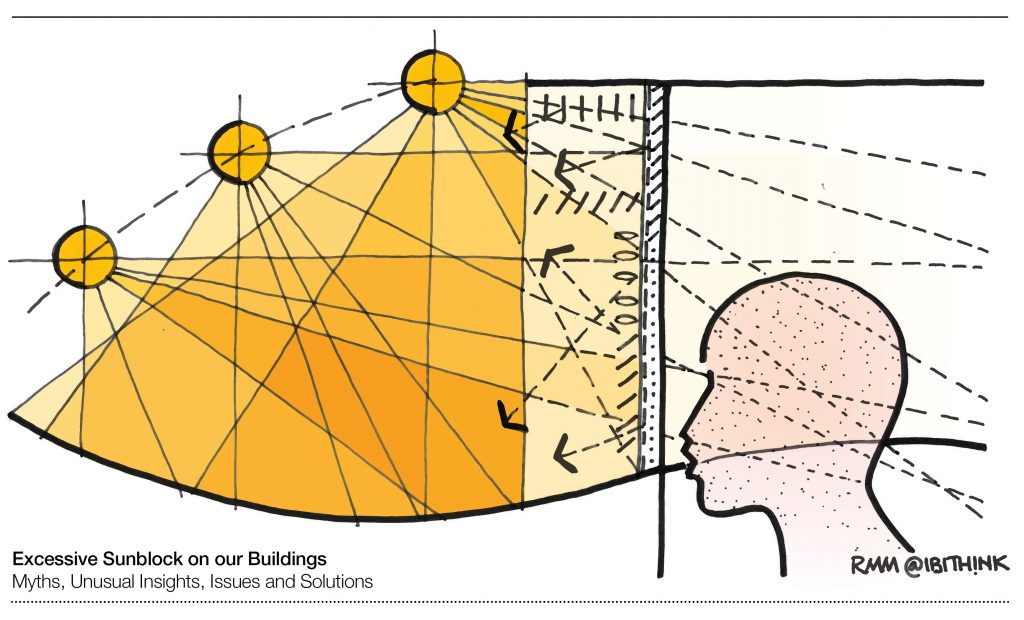 Clinicians today are increasingly concerned about the application of sunblock on our skin, effectively our “Body Envelope”, impacting Vitamin D deficiencies, dental bone growth, prevention of auto-immune diseases, cancers, cardiovascular diseases, depression, anxiety, sleep loss, etc., as well as the harmful chemicals contained within the sunscreens themselves. As healthcare architects and designers, we must be equally concerned about the building envelopes we design and the sunblock armoury of devices and specifications we have developed to minimise solar ingress and heat gain. On a macro level, health care masterplanners must be cognisant of the Evidence Based Research benefits related to health recovery when defining aspect and orientation on new developments.  Eleven research studies identify the benefits of daylight to the recovery of SAD, Seasonal Affective Disorder, or Bipolar patients. Also, Benedetti et al – discovered that east facing rooms reduced hospital stays by 3.67 days.

Biophilic Design is an innovative and rapidly growing design tool in architecture, defining the essential dialogue between humans and the natural world. Sunlight is a major protagonist in the theory of Biophilia. Our buildings increasingly interrupt this relationship and dialogue. This natural element navigates through transitional spaces, solar attenuating building skins, public and intimate spaces, then finally to be absorbed through our individual sensory receptors within our body envelope.  This exposure, in turn, affects our physiology, emotions, and psychological disposition.  This may potentially be further exacerbated by illness and medication.  Evidently, architecture must deliver permeable design elements that allow this vital, beneficial and symbiotic dialogue to occur.

Evidence-Based Research clearly provides us with compelling data in terms of the true benefits of full spectrum and diurnal daylight.  It is clearly an essential deliverable within the healthcare setting from Diagnostic to Treatment and Recovery spaces resulting in beneficial and accelerated patient outcomes to all.

From Mesopotamia to Today

Throughout history, luminaries such as Homer, Hippocrates, Plato and Pliny paid homage to the sun. The ancient Babylonians, Egyptians, Greeks, Romans, Mayans, Aztecs and Incas all recognised that sunlight could be harnessed to promote health. Hippocrates, for instance, believed it to be beneficial in the treatment of most ailments. However, medical interest in sunlight truly took hold at the turn of the 20th century, when research discovered that sunlight kills bacteria and that a deficiency in sunlight is associated with rickets, a condition that affects childhood bone development. As far back as 125 years ago, Scandinavian physician Niels Ryberg Finsen treated diseases including smallpox with daylight and this earned him the Nobel Prize for Medicine.

“By the late-1920s, sunlight was being touted as a cure for pretty much every illness under the sun.” Linda Geddes

Healthcare environments are essentially composed of clinical spaces and activities related to Diagnostics, Treatment and Recovery processes.  These three clinical spaces require a good distribution of natural daylight or a full spectrum equivalent in terms of artificial light. 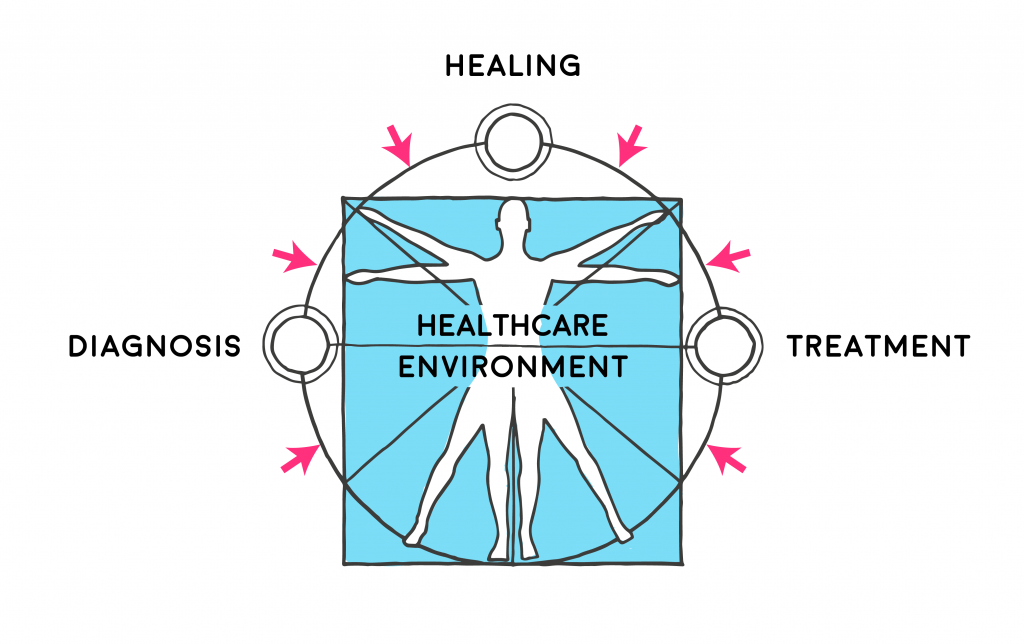 There is considerable compelling clinical evidence that states that ‘full spectrum’ daylight has beneficial impacts and outcomes on our three body systems, (Autonomic, Motor & State) and multi-morbidities such as the:

“HCAI’s remain one of the biggest causes of death in most countries” – Healthcare Associated Infections – An overview – 15th November 2018 M. Hague et al.

The Elephant in the Room

The WHO has identified air pollution and climate change as one of the ten biggest global health threat of the 21st century.  How will healthcare architecture adapt and evolve to the increased frequency and magnitude of extreme weather conditions? More frequent extremes of air temperatures will contribute directly to deaths from cardiovascular and respiratory diseases, which will be most common amongst the elderly population and sensitive patient groups. We will have to deal with not only the more familiar hypothermia conditions of abnormally low body temperatures, but hyperthermia delivering diametrically opposite conditions. The UK Government will have to reassess and recalibrate winter fuel allowances to include AC cooling.  New design tools will need to be developed to assess the resilience of the hospital building envelopes and their impact on varied patient profiles. Our building skins will have to adapt to much greater fluctuations in ambient diurnal and seasonal temperatures.

Through the ages, across global latitudes and architectural styles, solar control has varied considerably — on and within the external envelopes of buildings. From Roman/Persian shutters to fine Edwardian net curtains to the heavy, lead weighted, Victorian floor to ceiling, velvet-lined curtains. Hoods and canopies over alpine/seaside homes to pergolas in Mediterranean villas. From awnings, horizontal blinds, vertical blinds, window films, roller shutters to Brise Soleil ultimately culminating in more sophisticated and highly sensitive, sensor technology driven solar attenuators. Today, with the advent of accelerating climate change these devices have to develop further and work most effectively to combat solar heat gain.

This architectural sunblock armoury effectively forms our ‘Sunblock’ which prevents many of the beneficial components of ‘full spectrum’ daylight entering our patient environments. Architects and designers have to develop new ways of delivering optimal solar control as well as allowing real opportunity for the ingress of the healing qualities of daylight. A fine calibration of the two is needed.

Originally, we humans evolved symbiotically with the sun and the related diurnal and seasonal cycles.  We clearly benefitted from its lights and heat in multiple ways.  However, in recent decades we have lost this close dialogue with the sun and its healing, therapeutic properties. Indeed, we see it as a threat to our health, fired up by fears of cataracts, melanomas, etc.  We are told that we spend 90% of our day indoors which may well increase with the onset of “Climate Change”. There is compelling evidence to show how it can prevent and cure health conditions, both physical and psychological.

“Thanks to new discoveries, architecture is on the threshold of a new era in light”, states Cristobal Garrido – expert on Smart Daylight management in buildings BASF.”
It means that we can at last put the focus on people and no longer on building” Creating Chemistry for a Sustainable Future, Issue 8 2019

A longer version of this article was originally published in The Network in October 2019 and presented by PowerPoint at the recent IHEEM International Health Conference, October 8th 2019.

Richard Mazuch, Director of Design Research and Innovation, is an architect and designer who gains great satisfaction from translating holistic ideas into radical but pragmatic solutions.  An authority on healthcare, he provides profound insight into designing for global trends, patient groups and clinical provision – informing key decisions throughout the architectural process.  He has worked on numerous healthcare projects and has been elected as a World Architecture Jury member, as well as being a university lecturer/examiner and speaker at international conferences.  Richard has strong relations with key health bodies and has worked extensively with the NHS contributing to Health Building Notes (HBNs), Health Technical Memorandum (HTM), and their ‘Therapeutic Environment’ website feature entitled ‘Sight Sensitive Design’ and Sound Sensitive Design’ enabling designers to build evidence-based healthcare environments.

Richard Mazuch is an architect and designer who gains great satisfaction from translating holistic ideas into radical but pragmatic solutions. An authority on healthcare, Richard provides profound insight into designing for global trends, patient groups and clinical provision – informing key decisions throughout the architectural process. Richard has worked on healthcare projects in Italy, Hong Kong, Brazil, Oman, UAE, and more recently Australia. He has been elected as a World Architecture Jury member, as well as being a University lecturer/examiner and speaker at the International Conferences.

Richard is a founder and champion of IBI TH!NK. An advocate of evidence-based design, Richard creates innovations that positively impact the psychology and physiology of patient groups. Sense Sensitive Design, Emotional Mapping, the Design Prescription and the hPod are a few of the models that Richard has successfully pioneered. This has led to him co-authoring two new NHS guidelines for ‘Evidence-based Design Healthcare Environments’.
Richard is a product designer. In collaboration with manufacturers, he creates interventions, such as the BedPod, to support and improve patient care.

Richard was also an active member and contributor to the Expert Reference Group responsible for ‘Facilities for Maternity Care’ HBN21. He was a key contributor to ‘The Children’s National Service Framework’ an NHS and Department of Health document with evaluation process and recommendations Richard made early contributions and document reviews of ‘Creating a Better Health Environment’ an Audit Took Kit by The National Childbirth Trust in 2003.
In education, Richard is translating his work in healthcare paediatrics to benefit teachers and students. Working alongside University partners, he is pioneering the development of an ‘optimal learning environment’, improving motivation, behaviour and concentration amongst pupils, especially those with special educational needs. 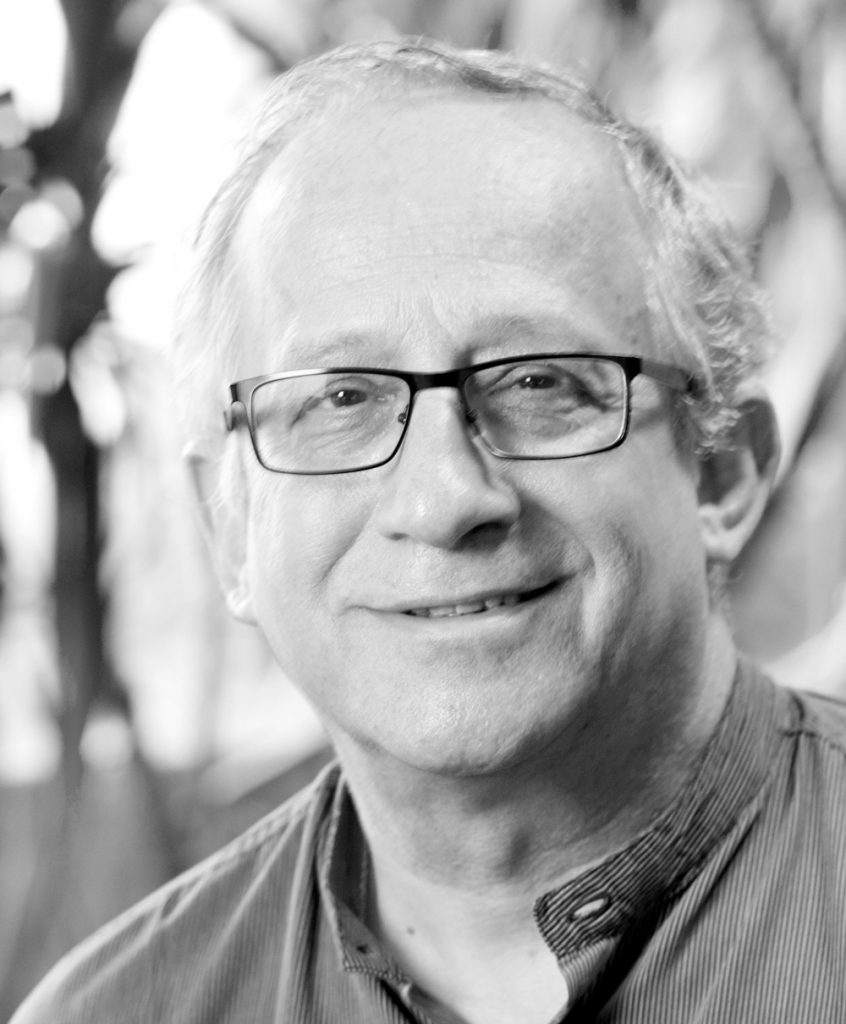