Winter is Coming- And with It the Annual NHS Crisis

With each passing year, the annual NHS ‘winter pressures crisis’ seems to deepen.  Against the NHS’s target of discharging, admitting or transferring 95% of A&E patients within 4 hours of arrival, major departments achieved an average of only 83.8% in 2016-17, with some facilities achieving less than 70%. The 40% rise in A&E attendances between...

With each passing year, the annual NHS ‘winter pressures crisis’ seems to deepen.

Against the NHS’s target of discharging, admitting or transferring 95% of A&E patients within 4 hours of arrival, major departments achieved an average of only 83.8% in 2016-17, with some facilities achieving less than 70%.

The 40% rise in A&E attendances between 2004 and 2016 is an obvious factor in this situation but not the only cause. After all, ten of the thirteen highest monthly attendances at major departments over the last four years have occurred in summer months.

So what are the principal reasons for this deterioration in performance over recent winter periods?

Although A&E attendances are generally at their highest during the summer months, the reasons for attending tend to be less significant, requiring relatively quick treatment. In contrast, a high proportion of patients attending in winter are the elderly and especially vulnerable, many suffering from severe illnesses or complex health conditions requiring lengthy assessment and pre-admission care.

In judging A&E performance we need to take into account not only these seasonal variations but also to bear in mind the context of overall acute care capacity. The number of overnight beds available across the NHS is 40% less than twenty years ago, and whilst increasing day case treatment and shorter lengths of patient stay have kept bed occupancy rates relatively steady at less than 90%, this decline in bed numbers in parallel with increased A&E attendances has meant that any unplanned unavailability of beds can have a disproportionate impact; for example, outbreaks of norovirus in the first two weeks of December 2016 led to the loss of nearly 700 beds per day. The result is the sort of well-publicised local crises reflected in headlines such as “Two die on trolleys is same A&E in one week as NHS struggles to cope”, or even A&E departments simply running out of space.

Potentially the most significant factor affecting A&E performance has been ‘bed blocking’ – delays in discharging or transferring patients as a consequence of there being nowhere appropriate to receive them. Such delay days rose by 50% in the three years up to April 2017 when the estimated number of ‘blocked’ beds reached 5,905 per day. As a result, average bed occupancy between December 2016 and February 2017 increased to nearly 95% – a level which the Royal College of Emergency Medicine condemned as having led to “overcrowded and at times unsafe emergency departments”.

So, what are some of the possible solutions to these problems?

Potentially the most transformational are the interventions currently being trialled by the urgent and emergency care (UEC) ‘vanguards’ and which are intended to deliver what the ‘NHS Five Year Forward View’ describes as “the right care, at the right time, in the right place”, thereby ensuring that attendance at A&E is no longer the default first choice for patients seeking treatment. These include:

Although the provision of more beds during the winter months would, at least for the time being, mitigate the problem of ‘bed blocking’, providing these on a permanent basis would be time consuming (and reliant on finding the elusive ‘money tree’!) so an alternative short term measure could be the temporary reconfiguration of other non-clinically essential facilities.

However, whether permanent or temporary, such arrangements would still mean ‘nearly well’ patients or those ready for discharge unnecessarily occupying expensive acute beds. Such delayed patient discharges not only directly incur time and money but can also further impact on patient health through the increased likelihood of infection, muscle weakness and the development of severe bed sores.

A longer term solution which the UK is at last beginning to work towards is the provision of additional beds outside the acute care environment, supported by integrated health and social care teams – eg low dependency units, patient hotels etc. In parallel with more general integration of health and social care, this approach largely mimics the ‘chains of care’ model which has been implemented in Sweden over the past 15 years and where reductions in bed numbers to an even lower number per capita then now exist in the UK has not resulted in the problems we repeatedly experience. It focuses on two elements: patient-centredness and shifting care out of hospitals by strengthening the integration of health and social care to avoid poorly co-ordinated care, avoidable hospital admissions, loss of independence or delayed hospital discharge due to the unavailability of essential equipment or reablement services; and reducing variations of quality of care across the country. 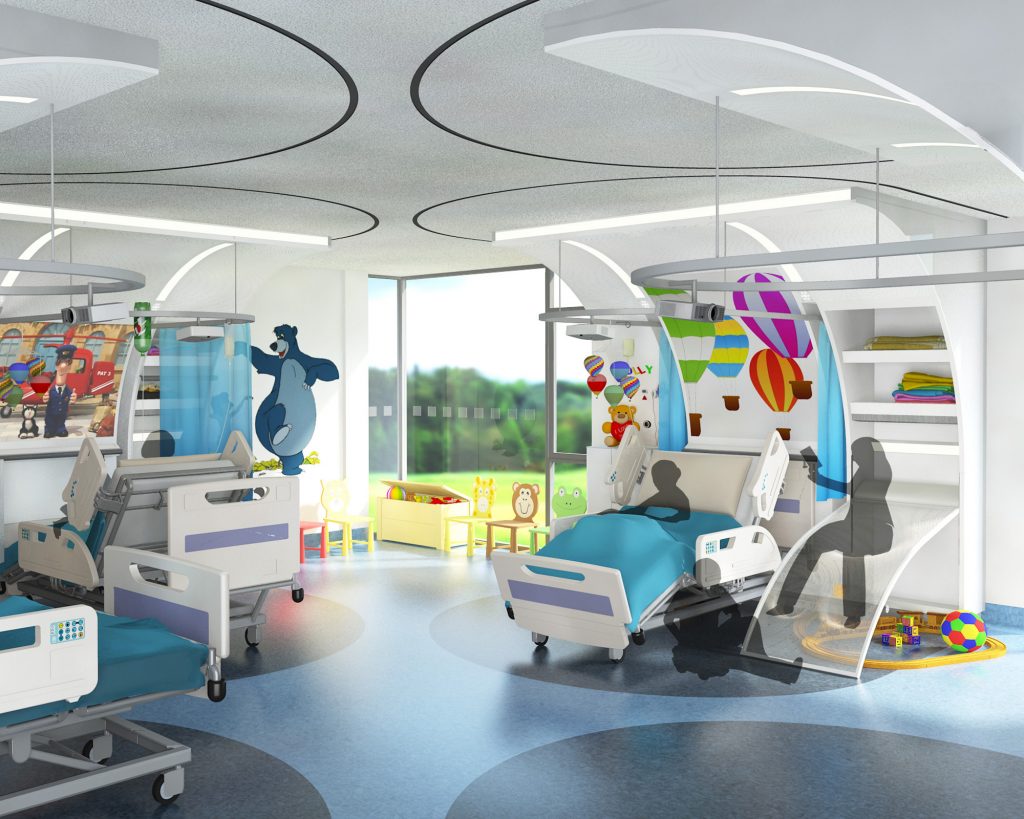 Rendering of the BedPod product.

There is also a role for us as designers and we must challenge ourselves to help provide solutions to these fundamental problems. At IBI, we developed the ‘BedPod’ as a relocatable technological solution where additional beds are urgently required (as well as to address issues of patient privacy and dignity and/ or the adaptation of otherwise unsuitable accommodation).

More recently, we have developed the ‘Med•BedHead’ – a ‘plug and play’, bedside home diagnostic/ medical equipment/ life support product designed to best manage individual conditions within the home whilst reducing escalating NHS costs and patient morbidity, and improving quality of life. The product organises the eclectic nature of care package paraphernalia (clinical measurement, medication, treatment, hydration, respiration and diagnostics equipment) in a user friendly form and through easy installation at the patient’s home in advance of discharge, can help sway the care team’s decision to provide a positive response to the question (succinctly phrased by Leicester’s integrated care team) “why not home, and why not today?”

John Knape is a qualified Architect with over 30 years of post-qualification experience and has been especially committed to the design of healthcare facilities and building types which fulfil social needs. His experience covers work in both the public and private sectors and he can draw upon a thorough knowledge of relevant design standards including Department of Health Building Notes and Technical Memoranda. John has experience of a wide range of procurement methods including traditional and two-stage tendering, design & build, partnering, management contracting and PFI and in his role as the practice’s Frameworks Director, has been instrumental in leading successful bid processes to secure IBI’s position as Primary Supply Chain Members on all three UK national healthcare Frameworks.

John has recently led teams on a number of projects in both the acute and primary care sectors, including the award winning development at Broadgreen Hospital, Liverpool. John is keen to pioneer innovative design solutions such as the “Barn Theatre” concept, but places great emphasis on excellent relationships with client and contractor as the key to a successful project.