IBI Group-designed M3 Condos is M City’s third and tallest tower with a slender design that soars to 81 storeys. Set to become the tallest tower in Mississauga by a significant margin, and one of the tallest buildings in the GTA, our design embodies an artful dynamism that has become so representative of Mississauga.

Following the unprecedented successes of M City’s first two towers, M1 and M2, the M City team unveiled plans for a third tower along the western edge of Mississauga’s emerging downtown. IBI-designed M3 will soar to 81 storeys, making it the tallest tower in Mississauga by a significant margin, and one of the tallest buildings in the GTA.

M3’s slender design features a subtle twist at the lower and upper parts of the tower and a dramatic sloped crown at the top. The design is rooted in the context of Mississauga’s downtown and was the result of a design competition held by Rogers Real Estate Development Limited and Urban Capital, which received proposals from several of the country’s top architecture firms.

“M3 preserves the spirit of movement and twists that made the M City 1 and 2 buildings so striking. It was important for our design to embody this artful dynamism that has become so representative of Mississauga, but with a subtle, refined application,” said IBI Group Lead Architect and Global Director of Buildings, Mansoor Kazerouni. “Mississauga has a very unique layout and acts almost as a city with two grids. You have due North and South forming one grid and a streetscape that runs diagonal to those directions. Our twist is meant to speak directly to both compositions. The result is a design that is completely unique to the site and emblematic of the ambitions of M City.”

The tower’s verticality is enhanced by a dynamic façade defined by saw tooth balconies that create a black and white diagonal pattern up the building, providing scale, texture and materiality. The tower form is crowned by a sloped and stepped top that complements the diagonal balcony pattern and creates incredible terrace units, giving residents a unique opportunity to experience the city.

Fronting onto Burnhamthorpe, M3 will provide unfettered access to abundant green spaces with M City’s expansive two-acre parkland abutting the podium. A wraparound café on the ground level along with a linear park on the tower’s north east side will activate a public realm in and around the site. The building’s unique design allows for an extensive amenity pavilion that includes an indoor pool and gymnasium, providing one-of-a-kind views of the neighbouring park. 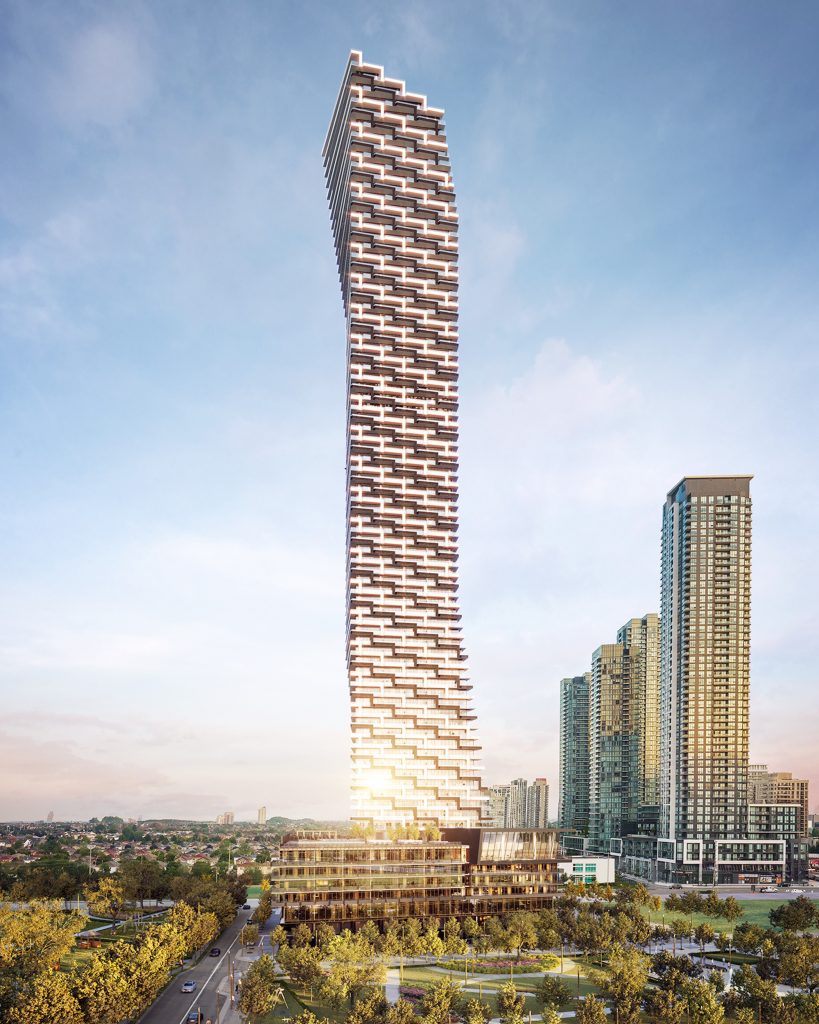 Find out more about Living+

“M3 cements the notion that M City is a catalyst for the evolution of Mississauga. I’m very proud of our tremendous team, which includes the owner/developer, Rogers Real Estate Development Limited, IBI Group, Cecconi Simone, EllisDon, Cooper Robertson and our other leading-edge consultants. Together, we continue to push the envelope and deliver a dynamic community that Mississauga will be proud of. We want to help put this city on the map as one of the most progressive, forward-thinking and creative places in the world.”