IBI Group successfully planned and designed 23 LRT and Commuter Rail stations and station areas of the Denver Regional Transportation District’s (RTD) FasTracks Program. Many of the stations are in revenue service, including the 12.1-mile West Rail LRT that includes 12 of these stations and an 820-car parking structure integrated into the end-of-line, multi-modal Jefferson County Government Center station.

Our responsibilities also included leading an innovative corridor aesthetics design process that included the integration of public art to articulate major civil structures including retaining walls, pedestrian and LRT bridges. The most notable is the 6th Avenue LRT tied-arch bridge. This iconic landmark spans the major U.S. 6 arterial roadway and contains nearly 1.2 million pounds of structural steel. Built adjacent to the roadway, this west gateway from Denver to the Rocky Mountains carries two LRT tracks. At night, the bridge tensioning cables contained within the arch are illuminated with LED light tubes. The lighting design, which is visible to the public that passes on or under the structure, provides an elegantly shaped image representing the mountain peaks of the Colorado Rockies seen to the West.

IBI Group also designed a station area plan for the West Rail’s end-of-line, multi-modal Jefferson County Government Center station and parking structure. Features of the new facility include the LRT station, bus drop-off area, and a three-level, 820 car park-n-ride structure. Respecting the visual prominence of the county complex and importance to the County, the design of the parking structure was delicately incorporated into its existing hillside setting to minimize its visual effect on existing views of the facility. Additional design features include vertical “green screen” panels with climbing vines on the outside walls to soften the visual impact of the parking structure. 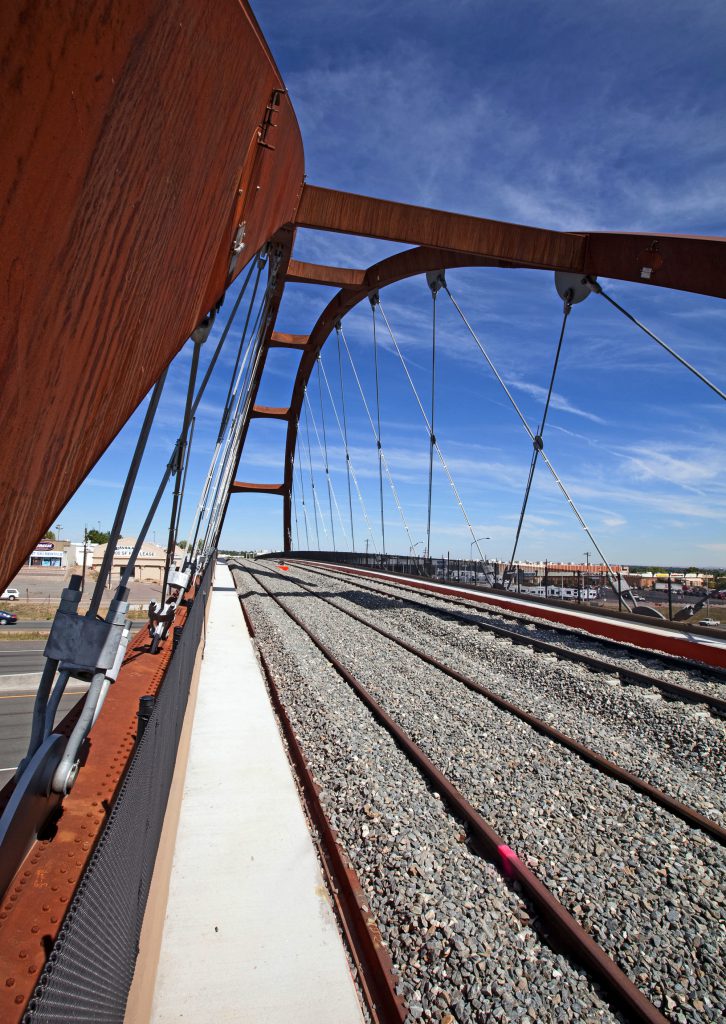