The Redevelopment Agency of LA enlisted IBI Group to convert a four-mile stretch of Figueroa – a busy/high-traffic corridor in Los Angeles – to a pedestrian and bike-friendly street. Transforming the busy thoroughfare and its 28 intersections into a complete street will be a significant milestone for the notoriously car-centric city, making it more accessible to cyclists, pedestrians, and transit users alike.

Figueroa Street is a major thoroughfare and an alternative to the Interstate 110 freeway in downtown Los Angeles. It also provides access to the Staples Center, the Los Angeles Convention Center, Exposition Park, the University of Southern California (USC), and is home to the headquarters of several auto dealers. Figueroa was identified as one of the key cycling arteries in LA’s 2010 Bike Plan (Backbone Bicycle Network) and is a key link between South LA, USC and downtown.

Retained by the Community Redevelopment Agency of Los Angeles (CRA/LA), IBI Group is leading the traffic signal, signage, striping design, and the analysis for the Figueroa Corridor Streetscape Project (MyFigueroa), with the goal to implement cycle tracks with protected right and left turn phasing to separate bicycle and vehicular flows from bike lanes. IBI’s local transportation consultants are gathering research on bikeway signalization, and creating a complex traffic signal phasing plan to safely handle vehicular and bikeway traffic in conjunction with pedestrians.

Part of Los Angeles’ complete streets program, the new and improved streetscape plan will enhance Figueroa to better serve the mix of pedestrians, bicycles, vehicles, transit and businesses that use this key corridor. This groundbreaking streetscape project is a significant step in making downtown LA less car-centric; a plan in development by the city for almost a decade. 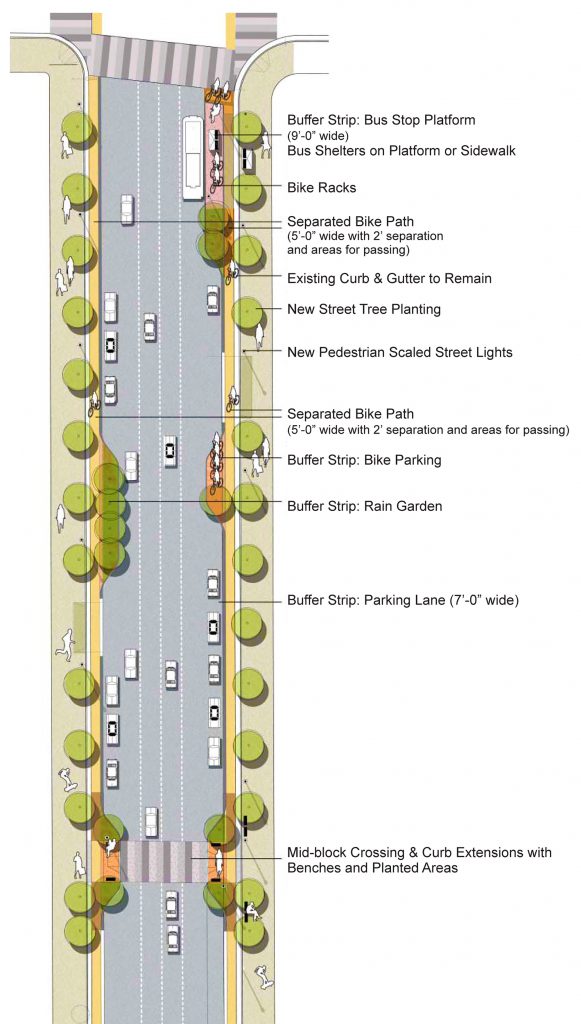 Figueroa Streetscape Plan will be a significant pedestrian- and bike-friendly milestone for the City of Los Angeles.

For more than 15 years, the Cincinnati Zoo & Botanical Garden has trusted IBI Group’s surveyors and engineers to provide a range of civil, site,...

England, UK
As part of Move 10, British Columbia’s plan to improve its transportation network, IBI Group was responsible for the design, development and deployment of the...